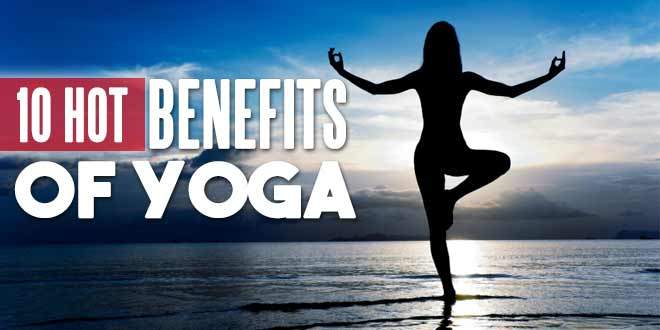 Yoga practice can improve the health of the mind and the body. This practice has roots in the ancient Indian philosophy. This meditative movement is practiced in many different styles, and it usually combines breathing techniques, physical poses and other relaxing tools such as a short meditation at the end of each session.

What should you know about yoga?

Practicing yoga might improve the ability to move and walk. Different studies show that people suffering from the chronic low-back pain felt much better after practicing a particular type of yoga, with adapted postures and breathing techniques for their condition. If you practice yoga regularly, you will reduce the blood pressure and improve the heart rate.

Yoga can help in cases of anxiety and depression as well. People suffering from asthma didn’t observe an improvement of their condition, while people with arthritis saw only mild gains.

Pregnant women, people with glaucoma, sciatica, and high blood pressure should take particular cautious measures and adjust the yoga postures not to damage their health.

When you are dealing with different health issues, it is important to talk to your doctor about any alternative therapies you are using, including yoga. The doctor will help and assist you along the way.

As we said before, Yoga includes breathing techniques, various physical postures, meditation and a particular life philosophy. The yoga practice is different from one instructor to another, and that is why there are so many yoga styles. In the United States, people are familiar with Hatha yoga. This particular style is about meditation and coordinating the breathing with the physical poses. Hatha yoga can include Viniyoga, Ashtanga, Kundalini, Ananda, Kripalu, Iyengar, Anusara, and Bikram.

Risks and side effects in yoga practice?

If your body is healthy and you practice yoga under the supervision of a well-trained instructor you should not experience side effects, and you are not exposing yourself to any risks.

Is yoga practice common in the United States?

A National Health Interview Survey confirmed that yoga is among the six complementary health practices commonly used by American people. It seems like there are more than 13 million people practicing yoga. It is interesting that more than 1.5 million children practice yoga as well.

Those who choose this method maintain their well-being and improve their health. They reduce the level of the stress and they manage to stay fit. Some health issues can be prevented such as neck pain, back pain or anxiety.

Many people started to practice yoga to reduce the back pain. Others are interested in keeping their mind clear and reducing the daily stress. Individuals with insomnia, anxiety or depression noticed that their mood improved after the yoga practice and they slept better. When you practice yoga, you keep your body and mind in shape, bringing more strength and flexibility in the organism.

How can a person become a certified yoga teacher?

In the United States, there are many training programs. These programs last from a couple of days to more than two years of practice and study. Because there are so many different yoga styles, many types of certification are available as well.

For example, the Yoga Alliance offers a certification after 200 hours of training. During these hours, a person can learn teaching methodology, anatomy, specific yoga techniques, philosophy and physiology. Other yoga programs require 500 hours or even more.

Do you want to start practicing yoga?

In nowadays, scientists are conducting studies to see the effects that yoga has on different health problems and diseases such as

The practice of Yoga reduces the effects of daily stress has on the body. When we are stressed, our bodies respond to stress through a fight-or-flight reaction, which activates the sympathetic nervous system and specific hormonal pathways. During this reaction, the body releases cortisol (the stress hormone) from the adrenal glands. Cortisol is the one that measures the stress response in the body. Yoga practice it is a great and relaxing way to reduce the levels of cortisol. If you practice yoga, you know that most Yoga sessions end with a pose called savasana. This pose is relaxing and helps the body to reduce the stress.

Yoga improves lung function and relaxes the body. The breathing techniques, called pranayama, are very effective when it comes to stress relief. These breathing methods are focusing the attention on slowing down the rhythm and breathing deeply in the stomach and the lungs. This way the body’s parasympathetic system activates and relaxes the body completely. If you want to improve your overall well-being, think about changing the breathing pattern.

Yoga helps the organism to reduce the level of pain. When people practice Yoga asanas (postures), meditation or they combined those two, they experience less pain. Studies showed excellent results in people with health problems such as auto-immune diseases, cancer, multiple sclerosis, and hypertension as well as back and neck pain and some form of arthritis.

Many yoga students and teachers claimed over the years that yoga helps them to maintain a healthy weight or to lose some pounds when necessary. A regular yoga practice can shape your body. It is important to know that you do not have to practice a strong form of yoga to lose weight. After you start practicing yoga, you will feel that your self-esteem improves and gain more insights on how to pay close attention to the body and to what you eat and drink. A study from the Journal of Alternative Therapies in Health and Medicine showed that frequent Yoga practice is linked with less weight gain in older people.

During Yoga practice, the body becomes more flexible and mobile. It is a great exercise for tendons, ligaments, and muscles to become more elastic.

Yoga postures work with every muscle in the body, and they increase the power of the entire body. If you practice yoga frequently, you will relieve muscular tension throughout the whole body.

Yoga practice improves the cardiovascular health by lowering the heart rate. This method can increase endurance and improves the oxygen uptake during breathing techniques.

During yoga postures, the blood is oxygenated appropriately and then spreads through the body’s cells maintaining the health of the organism. This is how yoga improves circulation in the body.

Yoga it is recommended to those looking to feel more present, to feel more connected with their hearts. The yoga practice gives to the student more awareness about himself and the world around him. This way he can improve coordination, memory, and concentration.

Yoga has a part of meditation which helps people to feel more inner peace and calm.2

Can yoga reduce anxiety and depression?

In 1970’s, scientists start studying the effects that meditation and other stress-reduction techniques have on depressive and anxious people. They paid attention to the possibility of using yoga as an alternative treatment for these health conditions. One national survey reported that about 7.5% of U.S. adults practiced yoga at least once in their life and that nearly 4% of U.S. adults are still practicing.
Yoga breathing techniques have similar effects like other self-soothing techniques, such as meditation, exercise, relaxation, or even socializing and being with and around friends.

Yoga reduces anxiety and stress by adjusting the stress response system. This thing improves breathing, lowers the heart rate and lowers the blood pressure. The heart rate variability is an important indicator which shows the ability of the body to respond to stress in a more flexible way. Yoga practice can increase this indicator improving the body’s ability to manage stress.

Doctors from the University of Utah conducted a study in 2008. They examined the effect that yoga has on stress response. The participants were experiencing pain at different levels. They included in the study 16 healthy volunteers, 12 people who were practicing yoga for a long time and 14 people suffering from fibromyalgia (these people have a hypersensitivity to pain, it seems like it is a stress-related condition). Researchers noticed that people who had problems in managing stress were also more sensitive when it came to experiencing pain.

Scientists are still wondering how is yoga exactly improving the mood, but preliminary studies confirm that the benefits that yoga has are similar to those of exercise and relaxation techniques.
In 2005, scientists published a study conducted in Germany. 24 women who were living in stressful conditions took two 90-minute yoga sessions a week for three months. Women in a control group didn’t change their regular activities.

They didn’t begin an exercise or stress-reduction training either during the study period.

All these women were much stressed and almost depressive.
After those three months, women in the yoga group noticed improvements in their mood; they were less tired, less sad or anxious. The scientists observed that depression issues improved by 50%, anxiety issues by 30%, and overall well-being by 65%. Women who complained initially of back pain, headaches, and restless sleep felt much better after the yoga practice than those in the control group.

In 2005, researchers conducted a study which examined the effects of a single yoga session for people hospitalized in a New Hampshire psychiatric hospital. The 113 participants were patients with major depression, bipolar disorder, and schizophrenia. After they had taken this class, the researchers noticed that the levels of anxiety, anger, tension, depression, hostility, and fatigue decreased significantly. Some patients continued to participate in yoga classes, and they reported similar positive health effects.

Other studies showed that yoga practice could improve the mood and quality of life for older people and for those people who are taking care of patients with dementia. Breast cancer survivors and patients with epilepsy felt improvements of their mood and overall well-being after yoga practice.

Why is controlled breathing important?

Yoga controlled breathing techniques are providing relief for depression. There is a program, called Sudarshan Kriya Yoga (SKY), which includes different types of cyclical breathing patterns (from gentle cycles to more enjoyable ones).

To observe the effect SKY breathing has scientists compared 30 minutes of this breathing (done six days a week) to tricyclic antidepressant imipramine and the bilateral electroconvulsive therapy in 45 people hospitalized for severe depression.

The study included two groups of men from a mental health center in Bangalore, India. Some participants were assigned to two weeks of SKY while others to a standard alcoholism treatment control. After only three weeks, 75% of men in the SKY group overcome the depression, as compared with 60% of men in the standard treatment group.

The two stress hormones, cortisol, and corticotropin were less present in the organism of men from the SKY group, and at very high levels in the body of men in the control group. The researchers concluded that SKY breathing technique might be an excellent treatment for depression in people recovering from alcoholism.

Yoga can help people with PTSD

One study examined the effects that yoga and breathing have in Australian Vietnam veterans diagnosed with severe PTSD. These veterans were drinking a large amount of alcohol daily, and most of them were taking antidepressants as well. These participants followed a five-day course with breathing techniques, education about stress reduction, yoga asanas, and guided meditation.

After six weeks, all the participants showed improvements in their mood and signs of recovery from alcoholism.

So many veterans from wars (about 20% of them served in Afghanistan or Iraq) suffer from PTSD. Experts claim that yoga can be a beneficial alternative therapy for these people.

Doctors from Walter Reed Army Medical Center in Washington, D.C., developed a yoga practice which helps the veterans returning from combat in Iraq and Afghanistan to relax deeply and to make peace with their fears. A psychologist at Walter Reed, Dr. Kristie Gore says the military is promoting the yoga-based therapies, and they believe that this practice is accepted much easier by soldiers compared to the stigmatizing traditional psychotherapy.

All these studies showed how people with severe depression, anxiety, and other mental disorders improved their health and they reduced their symptoms.3