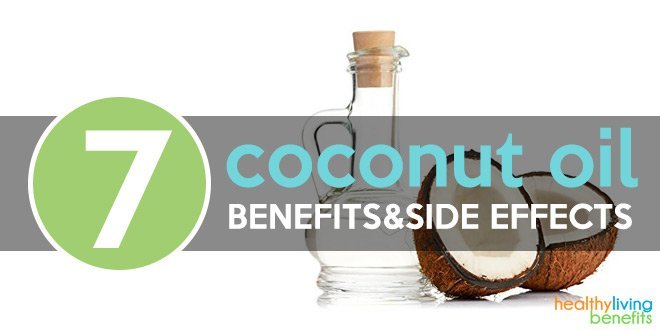 Many people have their digs at how the World Wide Web works today, how it can be improved, what are the immediate desirable changes, what it should and should not contain, as is the case with every major component of society.

The Internet is great at singling out and at uncovering snippets of (not always) relevant information. However, comprehensive information, descriptions, analyses are hard to come by and, usually cost money. This paucity certainly is true about information regarding healthy eating and living.

This article aims to be just that, a full take on the benefits one might reap from the regular consumption of coconut oil. We will cover, hopefully to everyone’s liking, the major points – how is coconut oil made, a brief history of coconut oil’s consumption, we will delve a bit into its chemical composition and, of course, highlight the major health areas and disorders coconut oil can improve or keep at bay.

The issue of regular coconut oil consumption is a controversial one, with well-argued points of view for and against, but all genuinely interesting subjects are controversial, so we hope this will come out as a balanced approach.

How Is Coconut Oil Made and Resulting Variants

Because it is extracted from the dried meaty part, the copra, of the coconut, coconut oil is also known as copra oil. That being said, this designation is somewhat misleading as there is more to coconut oil production, the description above being an oversimplification, because there are several variants of coconut oil, differing from one another in the manner in which they are produced.[1]

If you walk into a store, you are likely to find two kinds of coconut oil, virgin and refined, these being the two main classes, which can then be further divided according to other criteria. The virgin coconut oil will be the primary focus of this article, as the health benefits discussed here have been documented in the context of virgin oil use.

The virgin oil is the most sought after in recent years and is usually made from either fresh milk or fresh copra. If it the copra is involved, then the process is not so different from making most seed oils, as it requires a screw press or a manual one. The key to this process is the maturation level of the coconut, as less mature fruit have less dense copra, which leads to a more complicated extractive operation that, in turn, results in a lower quality of the end-product.

Producing the oil from milk can be done in more ways than one. The most common method involves the grating of the fruit, followed by adding water to the mixture, then harvesting the actual oil. Another technique involves fermentation of the coconut milk, with the extraction via thermic treatment. In facilities dedicated to coconut milk production, the residual material may also be heated to squeeze out any trace of oil.

For the very best oil quality, however, the least possible amount of heat should highlight the production process. Therefore, by using the coconut milk fermentation technique and a centrifugal machine, coconut oil of superior quality can be produced. The downside to this method is the small end-product yield and the high cost of the technological equipment.

As we have mentioned yield when producing virgin coconut oil from copra, one ton of coconuts (1000 kg/about 2200 lbs.) translates into about 120 kg (about 260 lbs.) of copra, which can yield approximately 50 liters of oil.

Virgin coconut oil preserves the aroma, taste, and smell of coconuts, an aspect that is definitely not to everyone’s liking, although when one considers the amounts of heat and chemical processing necessary for the production of the refined variety, it really comes down to the toleration of the distinct taste and smell, an issue which brings us to the next class of coconut oil.

RBD coconut oil stands for “refined, bleached and deodorized,” a type of oil that was a cooking staple in the 1950’s. Manufacturing RBD coconut oil involves almost always the dried copra from which the “crude oil” is extracted with the aid of a hydraulic press at high temperatures. This type is especially advantageous from an economic point of view, as one gets around 70 percent of oil from the total mass of the original material.

This “crude oil” by itself has many industrial applications (in the field of detergents, soaps or paints), but for cooking purposes, it needs to be further refined using a mixture of chemicals at high pressures and temperatures so that it can hit the shelves.

An optional treatment is a hydrogenation – treating the unsaturated fats (represented by less than 10 percent of the oil’s total mass) with hydrogen molecules to have a more saturated/stable end product – so that it will not melt at temperatures exceeding 24 °C (76 °F). This hydrogenated coconut oil is thought to be more appealing to customers residing in warmer climates.

Manufacturers should always label their products accordingly so that consumers should know if they are dealing with virgin oil or RBD coconut oil. Needless to state that half-truths have a rich history.

You will not be able to discern virgin coconut oil from RBD by appearance alone, as they both have the same buttery look at lower temperatures. If the oil is hydrogenated and there is a high(er) room temperature, then you could.

The ultimate criteria are smell and price. Truly qualitative virgin coconut oil is expensive and exudes a mild fresh coconut smell. RBD oil has completely no smell (since the deodorized), and low-quality oils emit powerful odors which are markedly off-putting. The same is true about the taste of these variants. In this section, we will list the main physical and biochemical features of (virgin) coconut oil, to clarify the issue concerning its consumption: is it the cholesterol-raising devil the FDA and Department of Health revile, or is it the elixir its advocates rave about?

In days past, coconut oil was popular due to its physical characteristics. Imagine a time when oil was a much rarer sight in kitchens due to its price. Therefore, a resistant product was in demand. Coconut oil undergoes few changes (except its aspect) with temperature and rarely becomes rancid. Some types of RBD coconut oil can be used for years without becoming spoiled.

The same kind of coconut oil has a high smoking point (more than 200 °C) and also a marked oxidative stability – when exposed to constant temperatures of more than 100 °C, virgin coconut oil breaks down after more than one day – which has led to its popularity for deep frying. The hydrogenated variant has been successfully used in baked goods, replacing solid fats.

From the biochemical point of view, coconut oil is more than 87 percent saturated fatty acids, chiefly capric, caprylic, palmitic, myistic, and lauric acids. This configuration is the main argument against its regular consumption, although the story does not end here and we will revisit it later. The rest, about 13 percent is represented by monounsaturated fatty acids, mainly oleic acid.

We have not listed these chemical designations for their sake, as capric, caprylic, and lauric acids belong to the class of medium-chain fatty acids (MCFA for short). These comprise a fair chunk of coconut oil, and they are responsible for the many health benefits a regular and moderate intake of coconut oil may bring.

MCFA are rapidly absorbed by the body, unlike their long-chain counterparts, producing energy almost instantly. When considering the energy it brings, 100 grams of coconut oil translates into nearly 900 calories, though obviously, the approach of including it in your diet needs to be a measured one. Indeed, most sources agree that no more than four tablespoons should be consumed throughout one day. As we have mentioned above, the popularity of coconut oil in the American diet had its heyday beginning in the 1950’s and had its secure place until about the 1980’s. Of course, throughout these decades, the relationship between intake of fatty foods and cholesterol was a murky one in the space of academia, never mind the average Joe, who was bombarded by contradictory information from all over the place.

Coconut oil has always had a permanent place in the culinary cultures of the tropical populations, with various traditional Indian medicines involving its use. Furthermore, its skin- and hair-care properties have been known for centuries within the spaces mentioned above. In the United States, the movies of the fifties and sixties were always accompanied by coconut oil “powered” popcorn.

However, as is the situation with every trend, the downfall of coconut oil use has its source in economic interests.

Throughout the 1980’s, intense lobbying and marketing campaigns (sometimes doubled by bogus medial-scientific studies) in favor of the soybean oil manufacturers (which already possessed the lion’s share of the vegetable oil market) brought the slow but sure demise of the popularity coconut oil had within American preferences.

Even the existence of articles such as this points to the status it currently has – a rather “exotic” product, known better for its use in cosmetics or even industrial applications, than for actual human consumption.

Though this is merely one side of the story and may be construed as having a bit of conspiratorial flavor, it nevertheless accounts for an actual change in consumer trend. And this present state is somewhat a shame, at least judging from the many improvements and ameliorations coconut oil can bring to the table, as we will detail in the next section.

7 Major Health Benefits and the Singularity of Coconut Oil

Before we get into discussing the actual benefits, let us succinctly check out the chemistry of fatty acids and particularly the why are medium-chain fatty acids (MCFA) the talk of the town.

In organic chemistry, fatty acids are compounds made up of one carboxylic acid (one molecule tied to a carboxyl group – COOH – that is carbon, oxygen, and hydrogen) and a chain made up of carbon and oxygen known as an aliphatic chain, which can take many forms.

This quasi-definition leads us to the two manners in which fatty acids are classified. Classifying by saturation means judging by how many double bonds exist between the chain and the carboxyl group. Saturated fatty acids present no such double bonds, mono-saturated acids obviously have one such bond, and poly-saturated ones possess two or more double bonds.

The other method of classification, the one which interests us, involves the number of carbon items present in the chain or more prosaically, the length of the chain. Thus we have short-chain (less than six atoms), medium-chain (6 to 12), long chain (13 to 21), and very long-chain (more than 21) fatty acids.

Clearly, these classifications are purely theoretical, as no consumed oil is comprised of a single category of each class. More than 60 percent of coconut oil is medium chain fatty acids, and more than 90 percent of it is saturated. This means that it has particularities on the manner in which it is absorbed by the organism during the metabolic process.

Generally, MCFA are more easily assimilated, provide instant energy as they are instantly transported to the liver, due to its ease of digestion they are suitable for people of all ages and exhibiting a variety of (not only digestive) conditions, and may act as a barrier against certain bacterial and viral infections. So, here are the details!

In the days before antiseptic solutions, treatment of wounds involved coconut oil, as the caprylic, capric, and lauric acids (specifically the mono-glycerides contained in them) have a noted anti-bacterial effect, and they also contribute to the restoration of the natural, slightly acidic pH of the skin. It is also great when applied to insect bites.

Coconut oil supports the aesthetic ideal of having lustrous, healthy hair by acting as a potent, natural moisturizing agent. Dry scalp skin is one of the leading causes of dandruff. As is the case with skin, this type of oil helps fight scalp infections. On the less than pleasant side, it is also used against hair lice.