Cockroach Milk | The Next Superfood According to Scientists 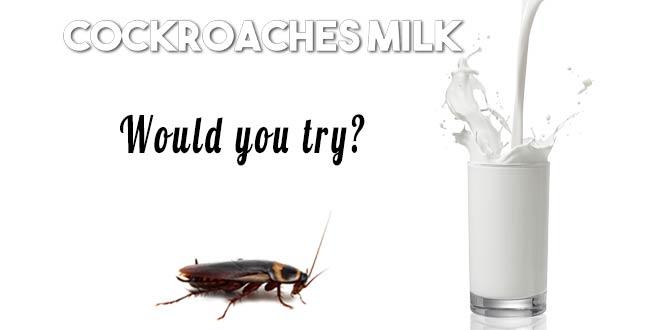 A new superfood in town

Lately, everybody is writing about a new “superfood” called Cockroach Milk.

Diploptera punctata is the Pacific beetle cockroach that can give live birth. The roach mother is nourishing the baby inside her body until the young one can take care of itself.

Scientists have reasons to believe that the milk secreted by these insects can become the next superfood.

Experts want to use cockroach milk to produce food supplements. They will not kill the insects to do that.

After many years of research, scientists are determined to synthesize milk protein crystals similar with those from the gene structure of cockroaches. Cockroaches can secret a milk protein that is rich in calories; it has three times more calories than the buffalo milk. It is hard to imagine that we will buy a food supplement that has as an ingredient “cockroach extract.”

Before we look closer at this initiative, let’s learn some cool facts about roaches, that very few people know.

The experts believe that are over 4,000 species of cockroaches all around the world.

Not all these species have a brown, ugly appearance. Many of them are not considered pests. A part of these roaches live in forests. They are a food source for insects, birds, and mammals. They also help the environment.

It seems like most cockroaches feed on decaying organic matter. The feces of these roaches release a lot of nitrogen in the soil. This way the ground is nourished using a natural method. If these bugs disappear, it can create enormous environmental imbalances.
The idea of exterminating these species is not a good one.

Some scientists believe that cockroaches can survive even a nuclear explosion.

After different tests, the experts concluded that cockroaches could survive radiation. This ability is the reason why these species survived several extinction events in history.

They can protect themselves against radiation because of their simple bodies and simple cell structure. Roaches manage to develop immunity to different poisons quickly, and they can reproduce fast.

Cockroaches are one of the oldest species in the world

They appeared on Earth 360 million years ago. Roaches were here before humans. Scientists discovered that these bugs were crawling on Earth during dinosaur period as well.

You might be surprised, but a cockroach without a head is still alive. It can survive days or even weeks. The roach will die in the end because of starvation.

A distinguished physiologist and biochemist at the University of Massachusetts Amherst, Joseph Kunkel talks about this strange phenomenon. He explains that when a human is decapitated, that person will die fast because of the blood loss. If someone cuts the head of a cockroach, the bug will survive an extended period because the neck can seal off by clotting. A headless cockroach will not lose blood as a human does.

This ability is pretty impressive when you think that an average person can hold the breath not more than 30 seconds.

In China, people use cockroaches for their medicinal properties

They are considered a natural drug. Roaches cure various health conditions, and they are more efficient than conventional medicine.
People usually cook and consume them. Roaches can also be made into powder and used as essential ingredients in homemade lotions to treat burns or in facial masks.

The cockroaches the Chinese people use are not the ones found in homes. The species are called American cockroach or Periplaneta Americana.

People who tasted cockroaches said they are very smooth, with a texture close to that of cottage cheese and with an earthy hint at the end.

The cockroaches can save your life

Many scientists and researchers conducted studies about the biology of cockroaches.

They are a great source of inspiration. The cockroach legs inspired the designing of a new generation of prosthetic limbs for humans. Their wings and exoskeleton inspired specialists to create new robot designs.
The biologist Kaushik Jayaram focused his studies on the cockroach locomotion and anatomy. After he had understood how a roach is functioning, the biologist developed a robot. This robot is not bigger than a human hand, and it is designed to have a tight shell. This robot has six legs. It can walk like a cockroach and can squeeze through tiny holes half its height.

All the laboratory tests showed that a cockroach could protect its body using the wings. This armor is meant to withstand forces 900 times the roach’s body weight.

After he had finished the study, Jayaram created a cockroach robot called CRAM. The robot is a compressible one with articulated mechanisms.

The biologist believes the robot can serve as a model for future robots created to rescue people after earthquakes. The robots will carry sensors and radios into destroyed buildings to let rescuers know where the earthquake victims are.

After an earthquake, it is important to find out if the destroyed buildings are safe for rescuers to come in. They can develop a system to gather this information when using the specially designed robots. The robots locate the survivors and the safe entry points.[1]

Besides the fact they inspire new technologies, they are influencing the food supplement industry lately.

Scientists are talking about the liquid secreted by the mother roach as a super nutritive food. They even believe this milk might be a solution in the future for the fast-growing population on Earth.

This liquid is composed of dozens of crystals. Scientists opened a Pacific Beetle Roach in an early phase, and they have seen under a microscope the most amazing thing. The small particles of the liquid looked like a constellation of nutrient-dense glitter.

Do not imagine that someone will milk the roaches to get the liquid packed with nutrients. Cockroaches don’t have nipples. The cockroach produces the milk differently than mammals. The mother is a live-bearing insect, but the gestational process is different.

As everybody knows, mammals have an umbilical cord. They transfer food to their babies to that particular wire. This bug has no placenta and no real direct connection.

In the brood sac, the embryos eat this nutritive substance. In the baby’s stomach, these proteins become hard crystals. The baby roaches depend on this super rich in nutrients food to grow and develop. They consume this “milk”, and they grow fast.

Scientists decided to take pictures of individual proteins. This way they figured it out how the milk proteins were structured. They used the X-ray crystallography technique.

The biochemists managed to transform the proteins into crystals. To accomplish this, they had to conduct many tests. All these tests were necessary because they didn’t know what will determine the proteins to crystallize. After they had obtained the crystals, scientists decided to put these crystals into a particle collider and to bombard them with high-power X-rays.

Diploptera punctata is transforming the milk proteins into crystals in physiological conditions. The scientists discovered that this liquid is rich in sugars, fats, and proteins. They were interested in studying more the green lipid in the middle. This fat helps the baby roach to produce energy. Another interesting thing is the so-called pocket which contains cholesterol and fatty acids. This first milk makes the nourishing process much easier for the baby roach. Without this protein, the roach would not be able to dissolve the food in its body fluids.

What the scientists did at the Institute for Stem Cell Biology and Regenerative Medicine in India was to replicate the protein crystals in the lab. The specialists discovered that the milk is not only a source of nutrients and calories but is also time released. When is digested, the crystals release more protein to support the digestive process. One of the scientists explained that a time-released food is considered a complete food. It is important to understand that these proteins cannot help a person with weight issues or one who is consuming already a high amount of calories per day.

These proteins will do wonders for those people struggling with hunger. Thanks to this superfood, they will be able to eat the necessary amount of calories and nutrients. Scientists agreed that the cockroach milk could be a great protein supplement.[2]

Milking a roach is not what experts had in mind when they come up with the idea of producing cockroach milk supplements. They are conducting new tests to improve the yeast obtained in the lab. Numerous companies use bioengineered yeast in the food industry. Using this technique, manufacturers are producing synthetic sweeteners.[3]

Roach protein as a solution for greenhouse gasses

This new possible superfood offers an alternative for people who choose to avoid cow’s milk. More and more people are worrying these days because of the environmental changes. The dairy milk production determines one of these changes. Experts have reasons to believe that cow burps and farts add to greenhouse gasses.

New research shows that livestock’s noxious flatulence produces a significant amount of the methane gas. When released into the atmosphere, this gas has a toxic impact on the environment. Unfortunately, scientists discovered that cows produce a much larger quantity of methane gas than they believed.

Oklahoma, Texas, and Kansas produce most methane gas. Here people raise a lot of cows, and they also have a flourishing oil and gas industry.
It is true that carbon dioxide is still the primary greenhouse gas. This gas contributes to global warming. Methane is another dangerous gas, among others such as ozone and nitrous oxide.

Experts are wondering if there is a way to help cows to fart less. According to some German studies, changing the livestock’s diet can assist them in the long term. Changing the cow’s diet from corn and soy to alfalfa, linseed and grass it means that we can alter the levels of fatty acids in a cow’s food. The new diet will lead to a reduced quantity of methane gas released into the atmosphere.

Many people started to drink almond milk instead of cow milk. Experts say this is not a great alternative either because growing the nuts it requires using large amounts of water. That is why they are exploring all possibilities of using the cockroach milk.[4]

Cockroach milk supplements are not available on the market

Scientists are still studying this protein. The high amount of calories can be a problem, and the experts are not sure if these crystals are toxic to humans or not.

The researchers are optimistic about the future of this roach protein. They believe that companies will develop a food supplement out of this cockroach protein.

The scientists behind this study created artificially a yeast system to produce more crystals. They will be able to provide the future cockroach milk supplements using the lab-created crystals mentioned above.

The experts will probably ask the manufacturers to write on the supplement’s label “protein crystal supplement.” They will avoid using the word “cockroach”.

Until this supplement is available on the market, you still have to drink cow or almond milk to get all your proteins and other necessary nutrients.