Dealing with Depression in 5 Simple Steps 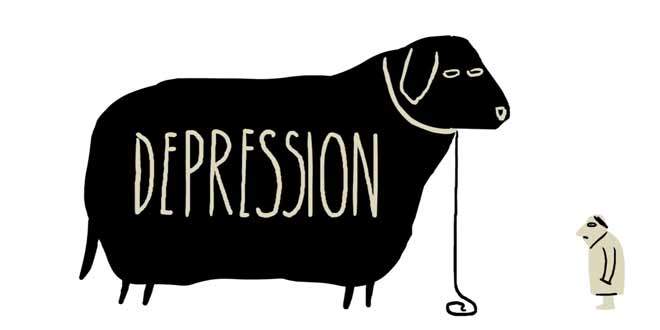 Depression is a complex notion we commonly use to describe either a persistent bad mood or negative feeling, a personality predisposition, a mental disorder or illness (clinical or major depression) or, some may argue, even a human condition (in a philosophical sense). Either way, it stands for a negative state of mind and feeling that can seriously affect a person’s behavior to the point where it can have a severe impact on their work, relations, future, therefore their entire life.

Usually, a depressive person has a lot of negative thoughts and no longer enjoys the same things that typically would bring them pleasure and happiness. When depressed, one often experiences severe boredom but, at the same time, shows very little interest in social life; other depressive manifestations include low self-esteem, anxiety, inability to focus on work or daily activities, insomnia, solitude and the lack of what is called Joie de Vivre. In its most severe forms, depression can make a person see life in very dark shades – purposeless and meaningless, not worth living and, as a consequence of this view –  suicidal thoughts and self-destructive behaviors are also entertained.

World Health Organisation (WHO) estimates that worldwide around 350 million of people of all ages suffer from depression; in 2004 it was rated as the third cause of disability at a global level, with the prospect of becoming the first in 2020. Here are some worrisome (if not disturbing!) facts about depression:

Before modern medicine and psychology, depression has been documented since ancient times in literature, philosophy, and art. Historically, depression has been known under the name of melancholia (derived from the Ancient Greek terms melas which mean “black” and  kholé, meaning “bile”) and was considered a disorder with specific mental and physical symptoms but in a much broader sense than depression is today. In ancient Greek and Roman medicine, any disease was equivalent with a  disequilibrium in our body. It was believed that there were four bodily fluids, in correspondence with the four main natural elements – earth, fire, water and air (black bile, yellow bile, phlegm, and blood). These could be found in balanced amounts in healthy organisms, while all diseases and disabilities, including melancholia, were caused by the excess or deficit of these “humors”. Sufferers of melancholy were described as having similar symptoms to those experiencing depression nowadays: dullness, sadness, dejection, anxiety and sometimes fear and obsessive thoughts.

Giving its complex nature, depression can have multiple causes, and its onset is triggered by many factors. The primary cause of depression is of a biological and genetical nature: studies and medical records show that the low level of certain substances in cerebral activity also known as neurotransmitters or monoamines (noradrenaline, serotonin, dopamine, etc.) is responsible for depression symptoms.  Depression can also be genetically inherited, and studies prove, for example, that people whose immediate family members have suffered from depression are a higher risk of becoming affected themselves.

People living in areas with limited sunlight are vitamin D deficient and tend to be more depressive.   There seems to be a link between this vitamin and depression: our brain contains receptors for vitamin D which are located in the same areas responsible for depression development. Vitamin D may increase the number of monoamines in our brain, but its exact action is yet unknown. However, chances are that vitamin D supplements might help significantly in treating depression.

There is also a form of depression called “secondary depression” that is either associated with other diseases (bipolar disorder, cancer, diabetes, stroke, etc.) or merely a side effect of certain medication used in the treatment of other or disorders. With prescribed medication, it is best to check if it is on the list of medicines that can cause depression and check with a health professional if your prescription is causing or negatively contributing to your mood swings. Medicines in the category of oral contraceptives, high blood pressure drugs or those fighting high levels of cholesterol are likely to produce this side effect.

At a personal level, apparently, the most susceptible populations are the unemployed and recently divorced individuals. Unfortunate or tragic events in one‘s private life constitute a common cause for depression. Losing someone close (by death or break-up), an unhappy childhood, being the  victim of a sexual, physical or moral abuse, taking part in traumatic events – e.g  war, accidents, violence, poverty, going through stressful situations like losing a job or a home – all these can have severe psychological consequences and could become a recipe for disaster.[2]

Now here’s one of the most interesting and recent theories about depression. Apparently, our modern technology and social networking are indirectly related to depression symptoms. Facebook and other famous social media channels were meant to use the technological progress to bring the human communication to a whole new level, their primary purpose being to facilitate human relations and connections so that they can take place regardless of the limitations given by physical location. Social networking is supposed to help to build virtual networks and communities, based on common interests or common acquaintances so that people can keep in touch with each other. It goes without saying that this way people are supposed to be socially active and to feel a sense of social achievement and personal fulfillment but, ironically, one of the consequences of using Facebook, among other disadvantages, is exactly the opposite.Facebook users, by constantly checking other people’s posts,

Facebook users, by constantly checking other people’s posts, pictures and profiles, more or less conciously experience a phenomenon called “social comparison”, by which they compare the virtual image of other people’s lives with their real  situation to the extent where they start to feel inferior and experience lower self esteem. People who spend too much time on Facebook will soon develop this comparison habit and will become prone to depression; they naively think their Facebook friends have shown their perfect life on the social network, with their attractive looks, their perfect relationships, their incredible travel pictures, their super interesting activities, their cute little baby, their thousands of “likes” to their posts, and so on.

However, we all have the tendency of selecting what to share on Facebook so that we highlight only what we want others to see – posts and pictures with our best moments, our best looks, our best achievements. And we also expect to receive a reaction to these actions because we need someone to confirm and validate our illusion of happiness. Sometimes it is just a way of playing with our identity and self image, but in most cases it is just a virtual show-off game we play to convince others and ourselves that we have interesting lives. It all seemed harmless in the beginning but researchers have recently connected depression symptoms to Facebook use so we need to become aware of the negative consequences of the social comparison phenomenon. [3]

How to Deal with Depression