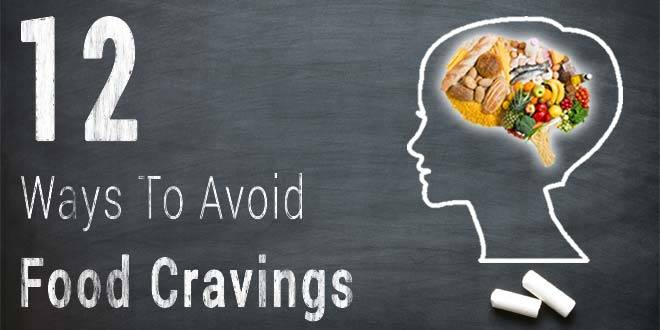 Picture this: you’ve decided to turn your life around, start living healthier, as well as make your eating and exercising routines work in favor of your losing weight instead of against it. All is going pretty much according to plan until you are faced with those midday or late night cravings, which test more than your willpower each and every time.

The worst part is that you’re usually hankering for something sweet or fatty, needless to say completely not waist-friendly. So what can you do to avoid or emerge successfully from such culinary ‘trials’? Well, believe it or not, it’s all a matter of perspective and determination. To help you on this journey, here are some tricks to achieving mind over food.

How to avoid food cravings in 12 easy ways

Think of an apple

If ‘an apple a day keeps the doctor away’, then ‘thinking of an apple keeps the cravings at bay’. Amazingly enough, this simple technique of picturing an apple whenever a craving starts kicking in can help you substantially reduce your calorie intake, as well as maintain your nutrition and hydration levels in better check.

You see, our body usually sends us signals that something is ‘wrong’ at an internal level when some sort of organic need is not satisfied. Hence, this apple trick can help you determine whether you’re actually in need of a nutrient boost or just tackling a random craving (out of boredom, emotional fluctuations, etc.).

It’s pretty simple: whenever you’re in the mood for anything sweet or salty, picture eating an apple to satisfy this hankering. If you’d be content with this option, then it’s okay to indulge in an actual snack because your body is signaling hunger; if not, then you’re probably just dehydrated, so go for a tall glass of water instead.

The truth is that most of the time, we usually ‘feast’ our eyes on most foods before we actually get to taste them, which can mean both good and bad news for cravings-control. How so? It’s simple – being bombarded every day with commercials that advertise sugary, fatty, and predominantly artificial foods is surely a negative influence even for the most cutthroat dieter, but there are also ways of effectively avoiding such instances from leading to over-indulging in calories.

For example, you could start making your own junk food lookalikes to both satisfy your munching episodes and not stack up on additional fat. If you’re in the mood for some crunchy saltiness, then some kale chips are the ideal choice for you. When your glycemic levels are dangerously low, then a tasty smoothie or a serving of dried fruit mix can fix you up just nicely, with no added calories or chemicals.

Before you reach for the nearest bag of snacks, try to imagine yourself actually eating that sort of food in order to significantly reduce the intensity of the craving. The advantages this type of visualization offers are multiple: on the one hand, you are more likely to reduce the portion you were initially planning on indulging on, since you are actively involved in projecting the effects this treat would have on your body in the long term (weight gaining, sugar spikings, etc.).

On the other hand, this portion can be further diminished by the simple fact of imagining eating because, in a sense, you are vicariously enjoying that sweet or salty snack in your head – and, as we all know, the brain is indeed the most powerful instrument of control when it comes to reining in cravings to start with. As one 2010 study showed, this technique can act as a more than efficient substitute for the real thing in the majority of cases, thus saving you up on calories and pounds gained altogether.

Let’s face it – starting a diet is more than often a daunting prospect in itself. From an accelerated training schedule to a very much restricted dietary regime, such drastic lifestyle changes are never that easy to handle in the beginning.

As such, the most challenging is the issue of deprivation and that of cravings, which are of course the body’s natural response to not receiving those previously common doses of (unhealthy) sugars, fat, chemicals, and various flavor enhancers which literally leave us wanting more with each new bite.

Thus, the best way to tackle this new chapter in your day-to-day life is by setting yourself on a balanced mindset and reminding yourself you can eat (almost) anything you’d like to, with healthy meals, moderation, and smart munching choices being your top priorities.

In addition, indulging in a certain ‘forbidden’ product or dish from time to time can realistically boost your cravings management and weight loss alike, since these small treats reduce the threat of overeating or binging over time.

Living in the fear of another cravings episode striking is no way to carry on with a sustainable lifestyle regime, but neither is caving into these outbursts of the ‘munchies’. For a more balanced approach to your appetite fluctuations, try to somehow introduce one unhealthy item in your routine diet for a stronger control over your hunger signals and mood regulation at the same time.

One small portion of chocolate, salty chips, or any other sort of otherwise ‘forbidden’ product can work wonders on your psychological approach to dieting, especially if you choose to indulge in it after dinner. Most nutritionists agree that setting this particular timeframe for ‘rewarding’ yourself can aid generate better control over cravings because you have something tasty waiting for you at the end of the day… every day!

Do you feel a craving sneaking in on you? Then don’t act on that impulse just yet – instead, take a few moments to visualize an internal ‘stop’ button inside your mind, then ‘push’ it. We all know that, when it comes to dieting, 90% of the effort is done mentally, so why not tap into this resource to make things easier in the long run? As many specialists nowadays conclude, human behavior is generally based on split-decision making, which can mean bad news for your waist and scales reading alike.

To escape this cognitive trap, just take some 10 minutes to ponder if you actually need that piece of chocolate or glass of wine by weighing in both the positive and negative aspects of this decision. Hence, you’ll become less prone to just going for your gut (quite literally!) and rationalize cravings not in terms of urgency, but rather of pros versus cons in terms of weight maintenance and psychological comfort in the bigger picture.

While the three main meals of the day (breakfast, lunch, and dinner respectively) play a huge role in figure management and keeping cravings under control, so do a few well-chosen snacks scattered throughout the day.

From veggies, legumes, and fruit to a small portion of Greek yogurt or a half a serving of nut mixes, you can easily and wholesomely hold your glycemic readings within normal levels, reduce your munching episodes, and generate better moods and energy for the entire day.

Nevertheless, you shouldn’t overdo it with the healthy snacks either – if you go through too much at a time, then you run the risk of adding up all those calories you were trying to get rid of in the first place.

To make sure this doesn’t happen, divide your treats into smaller, one serving portions from the very beginning (in bags, special containers, etc.). Consequently, you’ll both have them at hand whenever a craving starts creeping in and avoid munching on too much food in a single sitting.

Use technology in your favor

This latter technique can be used in effective hunger control because it gives you a very obvious choice: temporary satisfaction or the long-term one? By putting things into perspective via different forms of technology, you can hence temper your munching inclination and effortlessly lose weight over time.

Get into a good mindset

If a craving starts bugging at your mind and belly, don’t just assume you’ll give into it sooner or later. In fact, each time you successfully avoid an episode of the munchies, you’re building up on the psychological strength needed to overcome all the obstacles which inevitably mark any healthy lifestyle change.

While it might not seem like much at first, keeping a positive and determination driven attitude towards both fat shedding and cravings control can gradually lead to a much more facilitated approach to this matter to begin with. By giving yourself a pep talk or having a motivational quote on a note within view, you are working towards adding together smaller victories to form a more resistant and fixed mindset related to eating and overeating as well.

Ditch the TV during meals

Nowadays a staple of the end-of-the-day relaxation routine, lounging in front of the TV can pose a lot of threats to both your dieting endeavors and munching suppression. When placed in front of a screen offering mindless entertainment, your brain goes into ‘autopilot’ mode, which is bad for your thinking abilities and snacking control as well.

A direct link between eating in front of the TV and overindulging in food comes as no surprise, so why not ditch this negative habit altogether? Either have your main meals in the kitchen, away from all forms of distracting technology, or just take a small portion of your snacking choice to munch on in front of the tube (preferably a healthy one, like dried fruit or nut mixes).

Whether we admit it or not, the aesthetics of our meals have a big impact on how we eat, how invested we are in these moments, and how likely we are to develop cravings later on. In this sense, there is a myriad of tricks which can be employed for more efficient portion control, minimized calorie intake, and a long-lasting sensation of satiety afterward.

For starters, you should change your china – switching from 10-inch plates to 9-inch or even 7-inch ones can automatically create smaller portions while still tricking your brain into believing you’ve enjoyed a complete full meal.

Secondly, always have your meals in a peaceful, uncluttered, and food-friendly environment – as opposed to in front of the TV or on-the-go scenarios – to kick in the sensation of fullness earlier. Last, but not least, make sure you fully enjoy each and every single bite of your dishes to both lose weight in time and actively keep away from unwanted cravings.

As previously mentioned, cravings are an exercise in willpower more than anything, since your organism is not actually drawing your attention to a nutritional deficiency, but rather to an emotional or psychological one. So, in order to combat a munching impulse as soon as it appears, grabs something to write with or open up your phone’s ‘notepad’ and put down a list of the top 10 activities you could be doing instead of actually indulging in that craving.

From playing with your pet, redecorating a small corner of your house, exercising some more or doing your makeup to calling a friend, going online or catching up on some reading, the options are more or less infinite, depending on the person in question. Just give it at least 10 minutes of your chosen activity and you’ll quickly notice your cravings slowly subsiding.