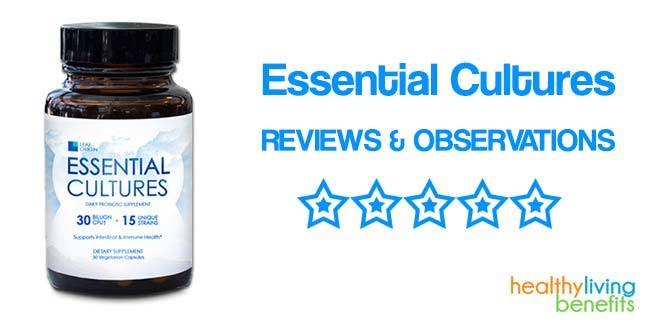 According to the presentation on the Leaf Origin website, the Essential Cultures supplement comes to the aid of those individuals who want to make sure that they get the most out of a probiotic supplement. Designing an objective and comprehensive review of any nutritional supplement is no easy task, because of the inherent controversy these products entail. To make matters more challenging, today we are tackling the already controversial subject of probiotics. Official, authority-sanctioned agents such as the FDA have declined responsibility for such products because they are in a “scientific gray area” – they exhibit a potential hinting at interesting results, yet not enough to be taken seriously and have a battery of tests performed, or maybe not enough lobbying performed. Who can know for certain?

Nevertheless, in this review we will cite and assess the manufacturer’s claims regarding “Essential Cultures”, provide you with a thorough analysis of the ingredients found in this probiotic supplement, discussing the merits of various existing testimonials, and finish with the delivery of our verdict that incorporates information about Leaf Origin’s supplement main competitors. The main selling points of this all-encompassing probiotic enhancer are the number of beneficial bacterial strains, 15, and the high CFU (colony forming units) count of 30 billion. From the tone of this pitch, it would seem that the 139 mg capsule, meant to be taken once every day, is all a person needs to improve or maintain their digestive health. We will comprehensively review Essential Culture’s types of bacterial strains.

When discussing probiotic supplements, “colony forming units” refers to the potential of stimulating the division of bacteria in the digestive system. Naturally, the higher the number of bacteria colonies that form, the greater their activity and effects on a person’s general well-being. Therefore, if you are a healthy persona intent on the maintenance of the current state or slight improvement, it is better that you use a supplement with a lower CFU count, somewhere in the 5 to 10 billion interval. Keeping in mind the fact that there are supplements that boost counts more than 45 billion, the consumer should take into account the fact that products with higher CFU count best suit those with mild disorders such as eczema, allergies or Irritable Bowel Syndrome. There have been instances where individuals consuming probiotics in large amounts (or supplements with impressive CFU counts) noticed side effects like constant bloating and/or recurrent stomach pains. Thus, Essential Culture’s CFU count feature is not necessarily something that should lure the consumer, but a fact that should elicit further consideration in the prospective buyer.

In addition to the CFU count and diverse bacterial strains, the manufacturer does not credibly single out other unique properties of their product. Some general statements regarding probiotics constitute the rest of the case made for Essential Cultures – improving general mood, regularization of bowel movements, a greater quality of sleep or a higher production of serotonin. Their emphasis on the compatibility with all kinds of diets (due to the supplement being made of natural 100 percent vegan ingredients), gluten- and lactose-free composition do not make Leaf Origin’s supplement one of a kind, quite the contrary. Furthermore, Leaf Origin backs up their affirmations by citing three scientific studies available on the National Center’s for Biotechnology Information website, however, upon inspection, the studies are concerned with the properties and effects of probiotics in general, irrespective of the form they come in (food or supplements).

Although this is an expected feature from the commercial point of view, nowhere on the site is there a mention of possible side effects of the supplement, except for the rather amusing footnote stating that some probiotic supplements may cause bad breath, yet it is not the case for their product.

Leaf Origin’s pitch concerning their primary product is average at best and totally unconvincing to most eyes. Nevertheless, we should delve deeper into the analysis of the ingredients that make up “Essential Cultures”, specifically a rounding up of the various bacterial strains so that the consumer can make their own informed decision on the possible advantages and disadvantages they entail.

Breaking Down the Bacterial Strains Contained in Essential Cultures

Marketing ploys aside, there is no question that the consumer should choose a certain probiotic supplement for what it consists and this product does impress when the number of bacterial strains is taken into consideration. Though the manufacturer insists on the Bifidobacterium and the Lactobacillus Acidophilus “wonder-strains”, a more detailed perspective is needed to evaluate this product exhaustively.

Testimonials, Criticisms and Our Verdict on Essential Cultures

There is an inherent problem with a majority of reviews these types of products have – there is no reliable way of knowing whether the manufacturer has had a say (through different “perks”) or not in the content or manner of presentation a certain reviewer may take.

Nevertheless, there is almost universal praise regarding Essential Cultures’ all-encompassing strains of bacteria, and also for the high CFU count, although we have already established in the first section of this review that CFU count is an ambivalent indicator of a probiotic supplement’s quality. The product receives compliments for having no recorded side effects whatsoever and also for the manner the customer can place an order on Leaf Origin’s website, especially the absence of a re-billing policy and the 90-day “Money Back” option. As a downside, many reviewers argue that the only way one can procure this supplement is through the company’s website. Furthermore, the price ($38.95 for a 30-day supply of 30 capsules, $88.95 for a 90-day supply and $157.95 for a three-month supply) puts the product in the upper echelons of probiotic supplements.

Even predominantly critical reviewers could not find truly scathing reviews of this product, or testimonials that attest to extended side effects. What makes this review particularly interesting is that even though the body of the review is not particularly favorable to the supplement manufactured by Leaf Origin, the verdict of four and a half stars out of five (based on 11 testimonials) is encouraging to customers. However, something that is correctly pointed out is that Leaf Origin is a new company (founded in 2014) whose business credentials are nowhere to be found (at least on the Internet), something that raises a little suspicion at least to future solvability.

This is not a particularly worrisome aspect. However, the fact that well-known portals (which publishes an annual ranking of the best probiotic supplements) do not publish their takes on Essential Cultures could instill some reserve in potential clients, especially those who enjoy performing extensive research on a product before purchasing it. Reiterating, this attitude could be a matter of specific (“shadier”) relationships between reviewers and manufacturers, because what goes around comes around.

First of all, we should stress that if you are a healthy person with no current problems (or prior history) of digestive problems, consuming probiotic supplements will probably have no bearing on your overall comfort. On the other hand, as is evident from the analysis above of bacterial strains, probiotics are recommended to individuals suffering from a wide range of disorders.

To go to the heart of the matter, Essential Cultures has a broad spectrum of probiotic strains that should come to the aid of people suffering from immunological and gastrointestinal problems. The high CFU count is especially recommended in these cases, and not for the average healthy person. Complaints of side effects from the use of this supplement are practically non-existent. On another note, some supplements have the same number of constituent probiotic strains and even better CFU counts (and reviews), all of this at friendlier prices. However, the case with probiotics is the same as with outfits; you cannot know if they suit you until you try them!

Consequently, if you are a consumer who was curious beforehand about trying Essential Cultures then you should probably go ahead and do it, keeping in mind that there are always alternatives out there, and in this case, the saying is especially so.