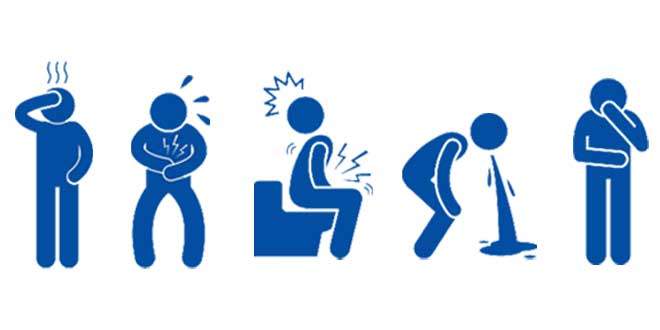 What is food poisoning?

Parasites, bacteria or viruses can contaminate the eaten food at any stage of production, cooking or consumption, if not handled or cooked properly.

Depending on the nature of the contamination, individuals infected with such toxins or organisms may not have any symptom or may present nausea, intestinal discomfort, vomiting or even diarrhea.

Symptoms can start within hours since the consumption of the contaminated food or even days, up to weeks since consumption. Most often the infection is mild and can be fixed without treatment, however, there are situations which require hospitalization and lack of it might even cause death.

Request medical advice if you experience:

The most common sources of food poisoning are infections caused by bacteria as Campylobacter, Salmonella, Shigella, E.Coli, Listeria, Botulism and Norovirus.

Campylobacter is one of the most common origins of food poisoning. This bacteria develops in raw or uncooked meat, untreated water or unpasteurized milk. The contact with infected children, wild animals or pets also transmits the bacteria from an individual to another.

The bacteria have an incubation period of two to five days.

Symptoms include diarrhea (at times with blood), nausea and vomiting, anxiety, fever and abdominal pain.

In rare occasions, it might cause brain and nerve problems or reactive arthritis.

It is recommended to drink plenty of fluids to avoid dehydration and recovery should take two to five days.

Salmonella is an infection that has a bacterial source which wild or domestic animals transmit to humans. The consumption of uncooked poultry, poultry products (eggs) or unpasteurized milk is another important source of Salmonella for humans. If one processes any food on a surface used to prepare contaminated chicken or turkey previously, it will most likely taint the newly processed food.

The infection can pass from the intestines into the blood and reach other organs. It also can become a chronic disease, in some cases, for individuals whom, although presenting no symptom, would be spreading the disease to others.

The incubation period varies from 12 to 72 hours.

Symptoms include fever, diarrhea, nausea, vomiting or fever and can persist for several days. Recovery from Salmonella infection usually takes from five to seven days.

Shigella is transmitted most often through feces and causes dysentery (intestines infections which generate severe diarrhea). The bacteria are usually encountered in crowded areas, in tropical or temperate climates.

Contaminated water can infect all foods it has contact with and human body often manifests symptoms of infection within seven days since consumption.

Recovery takes few days and does not require any special treatment asides from higher quantities of fluid consumption (to avoid dehydration). Severe cases might require antibiotics or stronger treatment.

ColiO157: H7 bacteria have been reported by field researchers to affect an exponentially growing number of individuals within the last years. It is a result of consuming uncooked, contaminated ground beef or unpasteurized milk. It can also be a result of swimming or drinking sewage-contaminated water.

It is important to know that children, even after they recover from illness, are still carriers of the bacteria and can eliminate it in their feces for up to two weeks.

The incubation period for these bacteria can vary from one to eight days.

Symptoms, for some individuals, include severe bloody diarrhea and cramps in some situation while in other cases symptoms may not be present at all.

When affecting children under the age of 5 or elderly people, the infection may cause hemolytic uremic syndrome which leads to the destruction of the red blood cells and kidney failure.

Listeria, a bacteria mostly found in water and soil, can affect the vegetables which grow in that ground. Food can also be contaminated from animals which carry the bacteria or even during processing phases. Unfortunately, these bacteria can be found in cold “ready-to-eat” foods.

Listeria is very dangerous for pregnant women and can lead to pregnancy and birth complications. Expecting infected women can experience only moderate, flu-like illness, but infection during pregnancy may cause premature delivery, infection transition to the child or even stillbirth.

There are cases in which Listeria spreads to the nervous system and has symptoms like stiff neck, confusion, headache, loss of balance and convulsions.

Listeria infection is confirmed through a spinal fluid or blood test. Doctors prescribe and administer antibiotics as a treatment for listeria.

Clostridium botulism is one of the most dangerous foodborne disease-causing

There are three types of botulism: foodborne, wound and infant. All of the forms are life-threatening and considered emergencies.

The botulism toxin infects the food which, once consumed by humans, leads to foodborne botulism while, at the same time, individuals can develop wound botulism if the C. Botulinum bacteria infect lacerations.

Symptoms of botulism include blurred or double vision, droopy eyelids, difficulty in swallowing, slowed or slurred speech, muscle weakness and dry mouth and usually appear between 18 to 36 hours since contamination.

Untreated symptoms can lead to paralysis of respiratory muscles, trunk, legs, and arms.

In developed countries, viruses cause almost one-third of food-borne reported diseases. Statistics state that in the United States over 50% of the foodborne disease cases are viral and caused by noroviruses.

Noroviruses affects individuals of all ages.

The virus disseminates by either person-to-person contact, contact with contaminated water or food and via aerosolization of vomited microbes and subsequent contamination of surfaces.

The incubation period is considered to start from 12 to 48 hours after exposure to the norovirus.

Noroviruses diagnose done by specialists through a routine procedure called polymerase chain reaction assessment for which results generated within hours.

Transmission is done directly from one individual to another, in most of the situations, or indirectly through contaminated water. Noroviruses are extremely contagious as fewer than twenty viral particles are enough to cause an infection.

Noroviruses illness has no specific medical treatment and cannot be treated with antibiotics as it does not have a bacterial source.[1]

Hepatitis A is a highly contagious liver infection caused by the Hepatitis A virus. It is most often spread by the fecal-oral route, either through person to person contact or by consuming contaminated water or food.

The incubation period for Hepatitis A lasts for about four weeks after infection.

Symptoms may include joint and muscle pain, high temperature, feeling tired and unwell, dark urine and pale stools or itchy skin and loss of appetite.

The best method to prevent Hepatitis A is through a vaccine.

There currently exist no antidote for hepatitis A. However, it typically cures on its own within a few months.

For 1 in every 250 infected individuals, complications, like liver failure, might appear. Older adults or people with pre-existing liver problems face the biggest risk of developing such complications.

Individuals whom are infected with the virus but are otherwise healthy can recover from gastroenteritis without complications. People with compromised immune systems, children and seniors are more likely to develop complications which can even lead to death.

The incubation period can take from one to three days since infection. The symptoms may range from weak to severe and can last from one-two days to ten days.

Symptoms may include watery diarrhea (most often not bloody), nausea and vomiting, low-grade fever, intermittent headache or muscle aches.

As symptoms are similar, often viral diarrhea is confused with diarrhea caused by bacteria (Clostridium, Salmonella, and E. coli).

As viral gastroenteritis has no treatment, doctors recommended a high focus on preventing such infection. Asides from staying away from the infected food or water we advise you to thoroughly and frequently wash hands to avoid infection.

Although parasites can cause food poisoning, it is a rare phenomenon which is generated by drinking infected water or eating contaminated food.

A parasite is a microbe (or germ) which lives within or on any other living entity and are usually found within the digestive system of animals (pigs, cattle, cats etc.’.) or in rivers, ponds or lakes.

Food-borne disease-causing parasites are either single cell organisms or tapeworms that consume blood or nutrients found in the small intestine causing inflammation of the area.

Toxoplasma is a parasite which causes ‘toxoplasmosis’–a rare but unpleasant food-borne disease.

Although it causes only mild self-resolving symptoms in otherwise healthy individuals, toxoplasmosis may cause serious issues to people with compromised immune system or a pregnant woman (risks of affecting the unborn baby or miscarriage).

Although found in the digestive system of many animals and birds, toxoplasma gondii parasite is most often carried by cats. It can be transmitted to humans when consuming infected meat or from the contact with infected cat feces or soil( touching cat’s litter tray).

The incubation period varies from few days to one month.

Symptoms of the acute toxoplasmosis include aches and pains, fever, swollen glands or skin rash.

Severe forms of the acute toxoplasmosis can lead to necrotizing retinol choroiditis or encephalitis (inflammation of the brain). Newborn babies can also experience nasal deformities.

The second stage is known as ‘latent toxoplasmos.’ The individuals whom develop this disease are not aware that they are infected. They don’t show any manifestation or if they do, it is after an extended period.

Most often toxoplasmosis resolves itself without the treatment however acute forms of the illness might need medication as pyrimethamine and sulfadiazine. Used to treat malaria, Pyrimethamine can be prescribed on its own or with sulfadiazine, which is an antibiotic.

Pregnant women have treated with spiramycin an antibiotic.

“Giardia intestinal” is a kind of parasite which causes infections very similar to other foodborne Although humans are mostly infected through drinking untreated water rather than eating contaminated food, eating salads and vegetables which the handler has washed in contaminated water will spread the disease (giardiasis).

The incubation period for this is between 9 to 14 days after contamination.

Most of the people who are infected by the giardia parasite do not experience any symptoms at all but can still transmit the infection to others.

Specialists prescribe metronidazole as a treatment, a weeklong of therapy with tablets.

To prevent food poisoning it is recommended to: