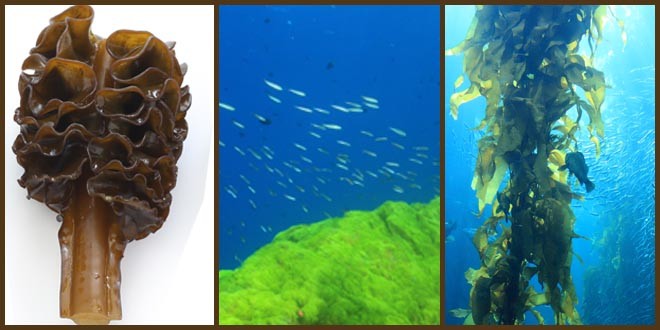 Fucoxanthin is a carotenoid (pigment) found in brown seaweed. It can also be found in other marine sources, in green and red seaweed, though it is most concentrated in the brown ones. In Korea, after giving birth, women are constantly fed with a seaweed soup called ” mieok”. This soup is made of wakame, a type of seaweed which is believed to give the mother’s body the minerals and vitamins lost during pregnancy.[1]

The alert pace in which we live compels us every day to less physical activity, making us not to pay attention to our daily nutrition.
Daily meals are often consumed on the hurry, containing a high amount of fat and sugar. Keeping our silhouette fit and our body healthy is not just an aesthetic need, but also a health benefit in preventing illness and physical discomfort.

Hydration, another factor which unfortunately is very often underestimated, has a huge role in maintaining us healthy, our body being mostly made up of liquids that must be daily reintegrated by drinking water.

Therefore, keeping ourselves in shape is quite difficult, people along time trying all sorts of diets and dietary supplements in order to help them and keep them healthy.

It is scientifically proven that seaweed does wonders, being extremely beneficial for the human body. It is renowned for helping with overall health and being efficient against cancer. Seaweed is rich in protein , carbohydrates, vitamins , healthy fats, and full of potassium and iodine. It has the ability to clean the body, facilitating the elimination of toxic waste. It also detoxifies the body, possesses anti-obesity effects, helping in losing weight and reducing the accumulation of fat.

Why is seaweed so beneficial to the human body? Plants as seaweed absorb minerals from the sea, which are needed for the body’s good health. Besides its content full of vitamins, carbohydrates, and protein, it also contains fucoxanthin.

Even though there were not many studies about fucoxanthin, it was discovered that it has a positive effect on the human organism. Until now, most studies have been done on animals, and only one human study.

However, the beneficial properties of this carotenoid could not be overlooked.

Even if you eat the same as before, fucoxanthin helps in decreasing fat stored in excess. It has fat burning abilities, but without exercise on a regular basis, the results will not be very fast, requiring from 5 to 16 weeks. It also reduces fat accumulation within the liver, reducing also the fat that wraps the human organs ( the most dangerous and unaesthetic fat).[2]

For quick results, our diet should contain protein and a lot of vegetables, in order to boost weight loss. Eating green vegetables is an easy way to make our metabolism work harder, thus eliminating the cravings for unhealthy foods.

In addition, the body burns twice as many calories digesting protein instead of carbohydrates. An easy way to add protein to our diet is including two meals per week based on fish.

Alongside with a balanced diet, fucoxanthin will help in burning fat efficiently, and will quickly lower fat stored, especially in the abdominal area.

A balanced diet and constant exercise are the best way to lose weight but, getting a little boost from fucoxanthin are always welcomed.

Fucoxanthin helps in lowering insulin and glucose levels within the blood. This is because it stimulates the secretion of DHA which is responsible for increasing insulin sensitivity and decreasing triglycerides ( a type of fat that it develops on the basis of sweets and alcohol) and LDL levels.

LDL is the lipoprotein that contains the highest amount of cholesterol (60-70% of total cholesterol). It is called “the bad cholesterol” because this lipoprotein facilitates lipid storage on the arterial walls. High levels of LDL cholesterol reflect a significantly increased risk of cancer.

Besides reducing cholesterol, this carotenoid also balances the level of insulin, helping us to control our sugar cravings easier.

The recent researches have suggested that fucoxanthin may also have anti-tumor effects, but there are no concrete studies yet to prove whether this is true or there are only rumors. It is said that has effects on prostate cancer, reducing the growth of cancer cells. However, it is too early to use fucoxanthin as a complementary treatment for cancer.

Besides all these, it activates a special cell protein which promotes the natural elimination of stored fat helping and energizing our metabolism. Helping in weight loss, fucoxanthin doesn’t have a lot of side effects, being beneficial to our central nervous system. It may also contribute to the fortification of our immune system, strengthening our hair, skin and nails. More, it helps in regenerating body’s tissues, blurring the aging effect. It increases energy and vitality, strengthening our metabolism.

As it was mentioned above, fucoxanthin is found in its natural form in seaweed, more exactly in wakame and hijiki. These 2 types of seaweed are used in many Japanese dishes in order to enhance the flavor. They’re also used for wrapping sushi.

If these particular dishes do not please your palate, this seaweed extract can be taken in capsules or powder form as well. In its dry form, it can be added to other foods or even blended with a shake.

When it comes to seaweed, people prefer the supplement form, admitting that the first thought that comes to their mind when thinking of marine algae, it that it tastes strange and awful. They also go with the supplement form because they want to get the most benefit out of each serving. If you want to try out new and different cuisines, give brown seaweed noodles a try and you’ll be amazed at the results. Also, some think that the best recipes for brown seaweeds are soups, which help to dilute the taste, however, you will get the most benefits from eating it raw.

Known Side Effects of Fucoxanthin

People should not consume large amounts of wakame, hijiki or other seaweed as a source of fucoxanthin. Seaweed is rich in iodine and excessive consumption can cause iodine poisoning. Also, high levels of iodine can interfere with the function of the thyroid gland. In addition, excessive consumption of foods rich in iodine it is not recommended, if there is a known allergy or hypersensitivity to iodine.