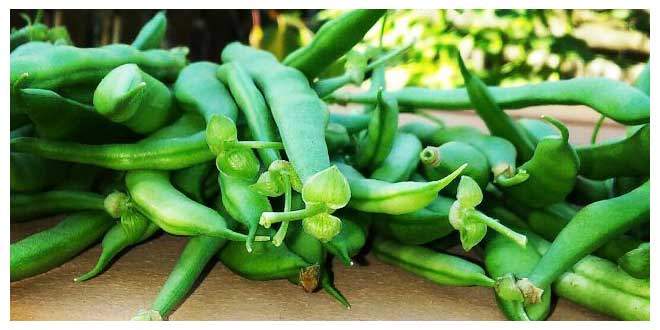 In comparison with more “leafy” vegetables, the qualities of green beans have not permeated traditional wisdom as much. That may be because of multi-secular habits or because they are not regarded quite as appealing as their more voluminous cousins. Nevertheless, green beans truly are nutritional gold mines – cheap, sturdy, raw, boiled, canned, frozen, rich in antioxidants, vitamins, minerals, fiber; and the list can go on and on if one has to make a compelling case in favor of green beans.

By the end of this article, we really hope to convince you to give beans a chance! We aim to do that by presenting several fun facts about them, followed by a detailed review of the nutritional information in the case of both raw and boiled green beans. We will then discuss the impressive number of conditions that the consumption of green beans prevents or helps manage, wrapping it up with advice on how to incorporate more green beans in your diet, because only through persistent action can one really reap the benefits.

All three designations signify the same plant, albeit for different reasons. The obvious signifier, green beans get their designation because of their intense green color; they are also called string beans because once the plant reaches its mature phase, a string develops over the whole length of the pod, although the current consumer trend dictates that they should be harvested way before the string has any chance to develop; and finally, they are called snap beans because when picked in their “infancy”, green beans are easily snapped with just a finger’s snap.[1]

Beans are a relatively new addition to the Western diet because they originate in the Andean plateaus of Peru, initially being consumed just in several regions of Southern and Central America, before the arrival of Spanish and Portuguese conquistadors in the 16th century. All beans consumed nowadays share the scientific designation Phaseolus Vulgaris which approximately translates into common beans. Beans are appealing for modern agriculture because they can be planted all year long, due to the fact they are usually picked at an immature stage one can expect multiple harvests, do not usually require fertilizers, and can be commercialized in a variety of forms. There are also a few disadvantages, however – a large and varied number of pests that attack the plant, green beans are vulnerable to drought and they need to be weeded diligently. The biggest producer of green beans is the United States, which accounts for about 60 percent of worldwide production (especially in the Midwest), with France and  Argentina also holding their own in this respect.

When purchasing green beans, you should be on the lookout for a few characteristics to make sure you get your money’s worth: search for a loose pile where you can inspect every plant for bruises or brown spots (which indicate intense pest activity), plants should have an intense emerald-shade green color, present a firm feel when touched, yet at the same time they should snap easily (indicating freshness).

The obvious and sound recommendation after purchase is to cook and consume green beans speedily in order to reap the maximum nutritious benefits, however, storing green beans in an airtight plastic wrapping in the refrigerator preserves a large majority of their properties, as long as it is for no more than 7 days (after 4 days modifications in the texture start to appear).

As to the ever-controversial aspect of frozen vegetables, green beans are suited to the practice with some studies showing that they lose only about 30 percent of their nutrients through freezing, although it is not advised to store them for a period greater than 3 months. In addition, some experts recommend steaming the vegetables for a couple of minutes before allowing them to cool down and proceed with the freezing process. To get the general considerations out of our way, we should specify that in this section we will operate with a serving sample of 100 grams regarding both raw and cooked (meaning boiled, drained and salt added) green beans. Fresh beans have a very low concentration of sodium and also negligible amounts of cholesterol and saturated fat, a fact also available for our cooked sample. Crucial vitamins contained in both samples are vitamin A, vitamin K, vitamin C, vitamins of the B complex (especially thiamin, vitamin B6, and folate). Although the mineral make-up is not quite as astounding as other vegetables, green beans (both raw and cooked) are reliable sources of calcium, iron, and manganese. Green beans are one of the best options in case you are undertaking a weight loss diet, as their caloric ration (in both forms discussed here) consists of approximately 80 % carbohydrates, 15 % protein, and 5 % fat. As a further argument in favor of beans, most of that fat comes in the form of beneficial omega-3 and omega-6 fatty acids and they do not encumber a person’s glycemic load, with the standard portion mentioned here amounting to less than 3 percent of a healthy daily intake of sugars. Although raw beans contain virtually no fat (except minute amounts of beneficial fatty acids), the number quadruples when cooking them, an aspect that may be of interest because they become important sources of omega-3 and omega-6 acids.[2]

If we consider the standard daily values in the context of a 2000 calories diet suitable for a healthy adult, then 100 grams of raw beans provide 31 calories, with just one calory being fat. Of the 100 grams, there are 7 grams of carbohydrate (3 grams of dietary fiber and 1 gram of sugars) and 2 grams of protein. The nutritional highlight that green beans add to the picture is the extraordinary amount of vitamin A and vitamin C – our standard serving size providing 15 % of the daily recommended intake of vitamin A and an impressive 27 % in the case of vitamin C. When reviewing the information for boiled beans there are no spectacular changes, yet the substantial decrease of vitamin C concentration (11 % less of the daily value than raw beans) and a small increase in fat at the expense of protein are worth mentioning.

In addition to the aforementioned numbers concerning vitamins, raw beans supply 18% of the body’s daily recommended amount of vitamin K per standard serving and also traces (between 4 to 6%) of vitamins E, B1, B2, and B6. An important piece of information for categories is that raw beans also can provide sensible amounts of the much-hyped folic acid, 37 mg of it or 10% of the daily value.

The position where green beans are found to be lacking, at least in comparison with their leafy cousins, is in the mineral department. The breakdown of the composition shows that the standard serving of green beans contains solid but not impressive amounts (3 to 6 percent of the recommended daily intake) of iron, magnesium, calcium, zinc, copper and potassium. Of the crucial minerals, green beans are noteworthy for their high concentration of manganese of 0.2 mg/100 g of green beans or more than 10% of daily value.

A less often emphasized mineral, whose importance has not well and truly been established (at least in the mainstream outlets) is silicon. It seems that it has a crucial role in maintaining bone health because as we age, bones lose minute yet crucial quantities of silicon, and there are not many (established or often consumed) foods that can provide assimilable silicon. The good news is that green beans are thought to be just that particular type of vegetable, yet nutritionists are still in the early stages of speculation on this matter.

There are three key properties that green beans possess which make them such an inhibitor in the development of a number of disorders we will mention shortly – lack of fat (and implicitly cholesterol), the supply of flavonoids (compounds with an antioxidant effect) and high dietary fiber content. These are reasons why a steady consumption of green beans is recommended for the prevention and/or halting the development of conditions as diverse as:[3]

The particular composition of green beans also helps with long-term:

The amount of information scientifically confirmed about the benefits of green beans pales in comparison with what is speculated about the advantages that regular consumption can bring. For example, the effects of chlorophyll within the process of human digestion has not been studied thoroughly. It is thought that chlorophyll can neutralize the pernicious effects that meats grilled at excessive temperature can have.

One of the possible benefits a regular consumption of green beans can bring is promoting fertility in women. Iron and folic acid assimilated from vegetable sources are indicated for women past ideal child-bearing age trying to conceive.

Reaching the sensitive subject of mental health, neural chemical reactions may also be  influenced by an adequate intake of folate. It is believed that folic acid acts as a deterrent against homocysteine, a non-protein amino acid which inhibits the production of serotonin, norepinephrine and dopamine, hormones that are responsible for mood, appetite or sleep, and naturally have significant impact psychological well-being.

Because there is nothing in this world without its perils, even the (over)consumption of green beans can have its inconveniences. There are documented cases of individuals allergic to green beans, although there are no mentions of life-threatening symptoms or cases. Another warning sign includes people who suffer from dysfunctions causing mineral deficiencies because green beans contain phytic acid, a substance that accentuates the condition. This can be avoided, however, by not eating the beans raw. Another potentially problematic substance present in green beans is lectins (proteins that bind certain structures in carbohydrates) which inhibit certain sensitive people from consuming too many green beans because, in these particular cases, a whole range of digestive discomforts can occur.

As we have seen from the nutritional profile and the impressive health benefits that green beans may have, they are truly wondrous vegetables, yet from the standpoint of taste, they are definitely not everybody’s cup of tea and, if there is any inter-generational continuity anywhere, this is particularly the case for children.

We will leave aside hints on using green beans for tasty dishes for a while to inform you that the first step one should take in preserving the nutrients in green beans while subjecting them to thermal treatment is through Healthy Steaming. This is also a great way for preserving their natural flavor, something that is lost through boiling, for example. All you have to do is fill a steamer pot with no more than 2 inches of water, rinse the green beans while waiting for the water to reach boiling point and steam them whole (this aspect is critical) for no more than 5 minutes. After this is realized, you can incorporate green beans into any of these healthy, tasty dishes: