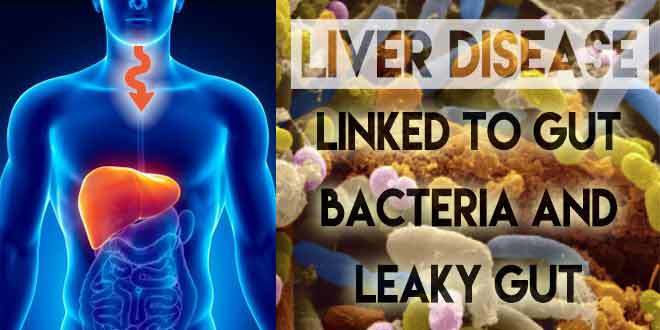 What are gut bacteria and how can they affect our body?

Liver disease, also called liver failure or hepatic disease, represents a condition in which the liver becomes damaged and is not able to function at an optimal level. It is imperative to note here that liver problems can occur via several mechanisms, the most ordinary one being a viral infection. Hepatitis B or C type can be transmitted at birth through the contact with blood that has been previously infected.

Furthermore, according to a NICE (National Institute for Health and Care Excellence) publication in 2012, this problem in newborns becomes chronic, the percentage being very high, of 85%. The disease can progress and reach liver inflammation from the fat excess. Scarring can also take place as the immune system tries to fight through healing, but extensive scarring can trigger the installation of cirrhosis.

May different types of bacteria alleviate the symptoms of liver disease?

The inflammation of the liver due to toxins most usually coming from alcohol, but can also be caused by autoimmunity or hereditary conditions. Hepatitis is a disease which can occur without any installation of obvious signs or symptoms, but can lead to a worsening state of the skin, particularly speaking about color. The skin will get a yellow discoloration and the eye color will also be affected.

Furthermore, if it is the case of acute hepatitis, then the liver failure will be major and might trigger the appearance of liver cancer. Viral forms of hepatitis are found worldwide, being followed closely by non-alcoholic liver disease or alcoholic liver disease. What is more, this condition can start as a result of toxic substances ingestion or paracetamol and Algocalmin intake. Plants or various kinds of organic solvents can also trigger the appearance of this illness.

this represents the kind of liver malfunction that is the manifestation of alcoholic beverage overconsumption. In the case of cirrhosis, symptoms show up very slowly, in the course of a few months or even years.

At the earliest stage, there are no symptoms at all, yet, after a while, the human’s condition starts worsening, as the immunity level drops significantly and the person becomes more and more tired, weak, as well as moody.

Symptoms will include itchiness, swelling on the lower side of the legs, yellow skin development, a spider-like formation of veins on the skin, fluid build-up in the abdomen, infections on large areas of the body.

Cirrhosis is most common to occur to those who consume two or three drinks per day over a significant period of time. The non-alcoholic fatty liver disease is also possible to occur, being triggered by obesity, high level of blood sugar or pressure, diabetes. The less ordinary causes include autoimmune hepatitis, medication intake, primary biliary cirrhosis or hemochromatosis.

This form of liver failure is also called hepatic steatosis and represents a reversible illness wherein large accumulations of triglycerides can get into the liver cells. Obesity and alcoholic beverage intake are the two causes which lead to this disease that occurs worldwide in a staggering number.

Hepatocellular carcinoma manifestation, a disease which results from either a viral hepatitis infection or Non-alcoholic fatty liver disease (NAFLD). This form of liver malfunction is the type of illness which can develop into more severe and also rare irregularities, including angiosarcoma (cancer caused by cell lining of blood vessels) or hemangiosarcoma (rapidly developing a disease which is extremely invasive and painful).

Primary sclerosing cholangitis (PSC) – this form of liver disease, unfortunately, has no effective treatment. Transplantation is the one thing to take into consideration, but it should be said that solely a few people can require it. Most patients also develop ulcerative colitis or Crohn’s disease, probably stating that the intestine plays a major role in the installation of sclerosing cholangitis.

Liver disease is a condition that can be treated with anti-viral meds, but there are also forms of liver malfunction which can be supported by actually slowing down the disease, by doing the following: taking in URSO, an abbreviation which stands for ursodeoxycholic acid, this being in case of cholestatic liver condition, drugs that can make copper transfer to urine (in case of Wilson’s disease), removing blood (a medical procedure which is called venesection) in case of iron excess or, in case of autoimmune hepatitis, making use of steroid-based medication or drugs.

What gut bacteria can do?

We have heard a lot about gut bacteria, also called probiotics, but what can they do? How do they work and can they bring an advantage to us?

Gut bacteria, also commonly known as microbiota, gastrointestinal microbiota or probiotics, represent a complex of tiny organisms which live in the digestive tracts.

They can bring a myriad of benefits in terms of offering energy, preventing species of microbes to damage the immune system, helping in case of constipation, diarrhea, IBS, common cold, positively controlling the metabolic function, removal of ‘bad’ types of bacteria, preventing allergy, preventing inflammatory bowel disease and so on. There are many types of probiotics.

The classification is the following:

According to recent research, there might be a connection between gut bacteria and liver disease alleviation. The gut and the liver are strongly linked, being a continuous communication between the two organs through the following: inflammatory mediators, bile, hormones, products of absorption and products of digestion.

The quality of the intestinal microbiota ought to be expected to have not only indirect but also direct effects on the liver functionality. NAFLD result, a term we have previously seen, which stands for a non-alcoholic fatty liver disease may be connected to microbiota, an accumulation of microorganisms.

This is done through altering insulin sensitivity and normalizing fat deposition, as well as influencing bacterial metabolism.

When it comes to cirrhosis, the microbiota is directly involved in the HE (an abbreviation which stands for hepatic encephalopathy), as well as other diseases, here including esophageal bleeding, bacterial peritonitis and more.

The level of efficiency in tempering the flora in the intestines when it comes to hepatic encephalopathy has been widely analyzed. Researchers actually found that probiotics, together with other beneficial bacteria, including synbiotics or prebiotics play a major role in regulating the gastrointestinal flora, as well as strengthening the immune system.

So, if you were wondering if gut bacteria can bring advantages to the human body, then you can rest assured that they can make a significant difference. Studying if gut bacteria can help in case of liver disease, professor Severine Vermeire and his colleague Jeroen Raes can shed some light on this problem.[1]

First off, it would be imperative to look at the fact that microbes are found in many areas of the human body, including lungs, skin, gut and so on.

The ‘good’ or ‘beneficial’ bacteria have many different positive roles, including digesting food, eliminating microbes, cleaning up the body, aiding with digestion, protecting in case of ‘bad bacteria’ invasion, as well as fighting diseases.

The two researchers have extensive experience in assessing microflora and gastroenterology. They also have laboratories and are more than qualified to determine whether or not gut bacteria can alleviate the symptoms or help cure liver disease.

The two have dealt with the problem of primary sclerosing cholangitis, a form of liver disease and tried to see if gut bacteria actually prove to bring positive notes.

By making use of genetic sequencing of the Deoxyribonucleic acid, the two scientists managed to compare PSC confirmed patients with a number of bacteria found in healthy people.

According to professor Vermeire, gut bacteria can be very efficient in future research, paving the foundation for identifying PSC suffering adults or see if patients will need treatment based exclusively on the microbiota. Such therapies might include direct pre-and probiotic intake or fecal microbiota transplantation.

The objective of the research conducted by the two was to find if probiotics can prevent liver disease, particularly PSC. Here is what their study highlighted: the two researchers collected samples from 147 people, 52 of them being diagnosed with PSC, while the rest were healthy and body and mass matched volunteers.

The results were exactly what they expected. PSC patients’ microbiota turned out to be decreased ‘microbiota diversity’. Furthermore, dysbiosis was also found. In addition to running this test for PSC, the two researchers also looked at the level of efficiency of probiotics in people with NAFLD.

They mixed different types of lactobacillus with vitamins and other nutrients to find that, after this therapy, patients started to feel better, the liver function improving miraculously. Another important thing worth noting here is that, even after the treatment was stopped, the positive results remained, the liver functioning being persistent.

They assessed alcoholic liver cirrhosis and actually saw that probiotics can bring a myriad of advantages to the body, the most notable being the progression of the liver function.

This is thanks to the modification of the gastrointestinal flora with probiotics which has been supported with the additional intake of vitamins and nutrients.

Another noted researcher, from Omega Team in the USA, known by the name of Shayan Mohammadmoradi, saw that the intake of probiotics can boost intestinal barrier function and open the gate for conditions like hepatic complications or liver failure to be prevented and treated.

According to him, probiotics have the capacity to enhance intestinal barrier function, modulate the immune system, as well as eliminate the threat posed by lipopolysaccharides (also commonly known as LPS) formation.

Another essential piece of information would be that thanks to their ability to alter the gut-liver axis, probiotics can aid liver disease diagnosed patients and can help them get treated in an efficient manner.

The aforementioned Omega Research member, Mohammadmoradi, states that probiotics can also have the capacity to enhance GIT inflammatory conditions by transforming the intestinal barrier function and normalizing the immune system.

He saw that probiotics can adhere to the GIT mucosa and, thus, prevent the appearance of bacterial translocation, commonly known as BT. They have an extra characteristic, namely to acidify the gut lumen and to help form antimicrobial organisms and substances.

In this way, the ‘good’ type of bacteria can inhibit the appearance of outside threats, including viruses, microbes, bacteria and so on.

For instance, an Omega experiment conducted on a total of 20 cirrhosis patients and 22 NAFLD diagnosed patients saw that the 4-hydroxynonenal plasma level was improved significantly, meaning that proteins are changed in order for the immune system to get stronger.

All in all, it should be remembered that gut bacteria bring about more than a few great advantages to the human body, the ones worth noting being: consolidating the immune system, eliminating the ‘bad’ bacteria, preventing the appearance and installation of fatty liver disease, enhancing intestinal barrier function, modulating the immune system, influencing gut barrier functions, as well as reducing constipation, diarrhea, minor or severe bloating, stomach cramping, abdominal pain or IBS.

Research is still being opened as to how gut bacteria can alleviate the symptoms of liver disease, but one thing is for certain: probiotics can represent the future of healthy and efficient treatment against all sorts of diseases, particularly liver conditions.

Lactobacillus bulgaricus, Lactobacillus brevis, fermentum, casei or many others can combat a wide range of issues and limit the destructive potential of outside threats, including viruses, bacteria or microbes.

In addition to promoting regular bowel movement and offering enhanced protection through elevated pH resistance in the gastrointestinal tract, probiotics do have a major impact on liver diseases.