Health Benefits of Pulses – the Superfood of the Future 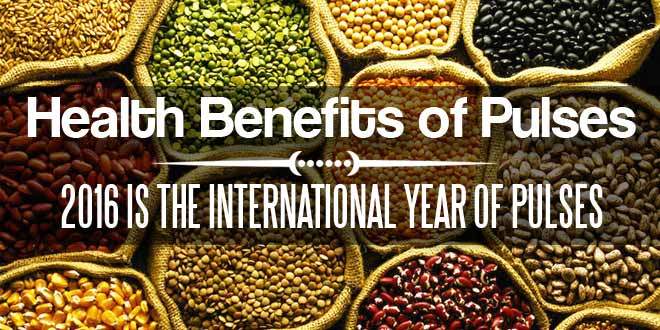 Diet is a fundamental element in maintaining a healthy lifestyle. Due to its importance, it is essential for it to include all food classes. Everything from proteins to carbohydrates and fatty acids should be part of one’s everyday meal. Add some vitamins and minerals and the body should feel just fine. All foods should be prepared and consumed according to a law of balance. It is for the best to  avoid excess when consuming simple carbohydrates or saturated fats. Too much meat may prove to be harmful to the health. Still, what is there to do given that people like it so much they even included it in desserts? According to a 2012 research, the average American consumed around 130 pounds of meat, both red and poultry, annually. Doctors warn about an increasing rate of medical conditions such a type II diabetes or cancer.[1][2]

Fortunately, if people decide to reduce meat consumption, there are plenty of alternatives available on the market. Most of them are cheaper and easier to cook. They also have an excellent reputation in cuisines all over the world. Part of the legume family, pulses seem to gain more ground increasingly in what was once a meat-based recipes universe. Pulses have been available for human consumption for thousands of years. Appreciated for their resistance and flexibility, they can be grown globally. In spite of this aspect, they prefer they prefer the warm soils of southern Asia or near east where they are extensively produced.[3]

Pulses are the edible seeds of legumes. They include foods such as beans, lentils or chickpeas. According to the Food and Agriculture Organization, soybeans and peanuts do not classify as pulses because of their oil production capacity. Also, nutritionists dismiss green peas and green beans as being part of this family. The former are excluded because, by definition, pulses are extremely low in fat. The latter are rather classified as vegetables.  In spite of being higher in nutrients than most foods, they are often times underestimated.

People regard them as ingredients for the poor who cannot afford to buy meat. Aside from this, beans in particular j have gained a negative renown due to their flatulence inducing substances. It is no wonder that many people avoid them. Also, green peas and beans limit the body’s capacity to absorb minerals and vitamins. Of course, many of these beliefs are pure assumptions. Beans produce gas  because they are a prebiotic food which makes them extremely beneficial for the digestive system. Also, green peas are not entirely accepted as part of the pulses category. Despite this fact, due to a strong resemblance in regards to their structures, most people consider they are pulses. Moreover, soybeans are seen as an oilseed rather than a pulse because they have high-fat levels. Even so, they mostly contain the same nutrients as pulses.[4]

Various studies aimed to highlight the fibers and protein’s importance in the diet. The difference between pulses and other vegetables is that the former contains higher protein levels and a multitude of minerals and vitamins such as iron, zinc and magnesium. Half a cup of beans provides a third of the daily fiber intake in a woman’s diet and a quarter in that of a man. Other important compounds include phytochemicals, tannins and saponins. Pulses are also rich in complex carbohydrates. Including them in the diet decreases the risk of cardiovascular disease, maintains normal glucose levels and can  be beneficial in preventing cancer.

Proteins are vital in the diet. Their  structure contains oxygen, hydrogen, carbon and many other compounds. Some are naturally occurring in the human body as the result of smaller units called amino acids being put together. There are some essential amino acids the human body lacks. Therefore, it must obtain them from an outer source, namely the food. Animal products are the main protein source. That is why nutritionists advise people to add low fat cheese, natural yogurts and lean meat in their diets. After being broken down into amino-acids, the blood stream absorbs them. Following this process, the body turns the obtained compounds into its own type of proteins. Aside from dairy and meat, proteins are found in vegetables. Even more so, there are plants to similar protein levels to those of meat.

The highest protein levels out of all vegetables are found in pulses. Without taking into account that they are cheaper than meat, foods such as beans and chickpeas are nourishing enough to represent the main dish on a menu. Meat and dairy products contain fat which can lead to a rise in cholesterol levels and increase the risk of obesity if consumed without measure. On the other hand, pulses offer the human body large protein amounts without affecting one’s weight. One of the reasons they are so appreciated is that they are low in fat. If properly cooked, they do not replace meat only in terms of nutrients but also taste.

Pulses do certain lack amino acids found only in animal products and cereals. Nutritionists advise vegetarians and vegans to combine pulses with cereals so that the body can obtain the absent amino-acids.

There are also two complex carbohydrate types: polysaccharides and oligosaccharides. They are both made of more than 3 simple units. The difference between them is that the latter cannot be broken down by the digestive system. They reach the intestines where their nutrients are finally absorbed. The process is beneficial for the intestinal flora. Most of the good bacteria living inside the intestines are anaerobic. This  means that they thrive in environments which lack oxygen. By directly reaching the intestines, the active substances found in peas and beans interact with the gut’s bacteria and eliminate the oxygen. Not understanding their mechanism of action, people tend to avoid beans. They do so because they link pulses consumption to flatulence. By showing more interest in this subject, people may realize the benefits and not be so embarrassed anymore by a normal body reaction.

Pulses are also rich in another complex carbohydrate, fibers. The advantage of pulse consumption is that they digest harder. This leads to a slower nutrient absorption which means the stomach is full for longer. More importantly, it sends signals to the brain that it feels full even after the food has been digested.

Phytochemicals are compounds found in plants. Most of them are responsible for the color. Therefore, they are not as significant in terms of nutrients. Specialists affirm that the more vivid a plant’s color is, the higher its antioxidant levels. Phytochemicals are found in fruits, vegetables, pulses, nuts and seeds. People who regularly consume fruits and vegetables have larger amounts of phytochemicals inside their bodies. These compounds have proven effects in decreasing the risk of certain diseases. Studies have linked the consumption of foods high in phytochemicals with a lowered cardiovascular disease risk. Pulses contain them  so they are ideal for one’s diet. This, combined with the fact that they are low in fats, has two natural consequences. Firstly, the body registers a cholesterol reduction. Secondly, the blood pressure enters the normal limits.

Foods rich in phytochemicals have also been connected to a reduced risk of breast or colon cancer. Experiments done on animals showed the effects of numerous phytochemicals types against cancer cells. Researchers have yet to reach a final conclusion.

Saponins are another class of chemical compounds found in plants. They act as a natural defense mechanism due to their bitterness that may keep animals afar. Some saponins are known to infuse substances into the plant’s structure. This can be life-threatening for some of them. Nonetheless, the chemicals are very diverse. Few known members are toxic. Pulses have significant saponin amounts. While some types can have a bitter taste and are rather harmful, others are beneficial for the health. Recent experiments showed the latter’s antioxidant, anti-inflammatory , anti-virus and possibly anti-carcinogenic effects. Chickpeas and lentils are some of the pulses rich in saponins.[5]

Because of their diversity and richness in terms of nutrients,it is only natural for pulses to contain essential vitamins and minerals as well.  The following are some of the most popular pulses. While rather similar in regards to how the body reacts to them, they are somewhat different in structure:

Pulses are a vital part of a vegetarian diet. They are rich in nutrients, nourishing and have numerous health benefits. Specialists are manifesting an increased interest in their health-related properties. [6]

Vegetables contain complex carbohydrates. They take longer to be broken down by the digestive system. As a result, the full stomach sensation persists for more than usual so the individual does not feel the need to eat again soon. A Canadian research conducted on a number of 1000 participants showed how pulses contribute to a natural weight loss. The subjects were asked to include beans, chickpeas and peas to their everyday diet without modifying their lifestyle. After a month and a half, most of them lost an average of one kilogram. Some pulses such as lentils and fava beans contain arginine, an amino acid linked to an increase in fat burning.

A similar study was conducted in a number of 30 obese patients. They were split into 2 groups. The first one followed a calorie restricted diet based on foods other than pulses. The second group was given weekly servings of beans and chickpeas. The research was completed 2 months later. The overall results showed the pulse consumption benefits: the second group lost 8 pounds (compared to the first group’s 5 lbs) and the cholesterol levels were considerably decreased.[7]

Pulses, especially beans, contain certain substances which cannot be broken down by the gastric juice. They are known as oligosaccharides or prebiotics and have a full impact on the intestinal flora. Our intestines lack the enzymes needed to break down these constituents. This is the reason why beans produce gasses. In the absence of severe medical conditions that may cause it, flatulence is completely normal. Moreover, it is beneficial for the gut flora because it is a clear sign that the good bacteria can enjoy a thriving environment. Most of the beneficial bacteria in the human body are anaerobic. Because they contain chemicals able to eliminate the gas from the body, beans should be consumed more often.[8][9]

Pulses can be beneficial in delaying the aging process as well. Many of them are rich in folates, chemical substances responsible for red blood cell production. They are also believed to have antioxidant and anti-carcinogenic properties. More research projects are to be conducted to establish their cancer prevention capacities. In any case, pulses are healthier than many other foods. Their high protein, vitamin and mineral levels are a possible proof in this regard.[10]

Balance is the key factor to a healthy life. Today’s food industry provides one with a broad range of products for all tastes and diets. Whether one enjoys meat or chooses to follow a vegetarian diet, there are plenty of options, some better than others. Pulses are ideal for both categories. They are cheap, incredibly diverse and taste good. Aside from nutritional value, they are also good at stimulating our taste buds.s[11]