Overview of The 2016 Olympic Games 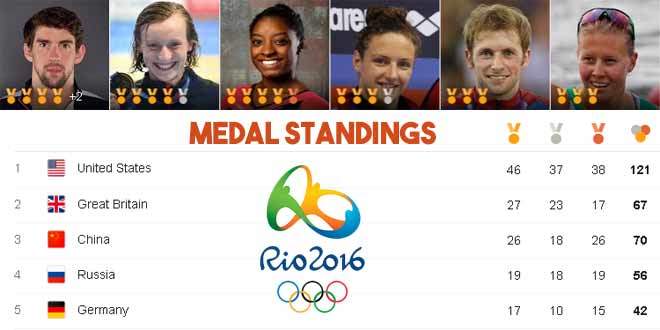 The 2016 Summer Olympics promoted by the media sources and more known as “Rio 2016’ was the 31st  Olympic Games Edition held in Rio de Janeiro, Brazil, from 5 to 21st August. A major international multi-sport event, the Olympic Games Rio 2016 delivered a multitude of remarkable achievements and new world records to a vast global audience. The media coverage and high-tech equipment offered the public an engaging experience during the two-week period.

The Olympic Games’ motto was “A new world”. The slogan marked not only Brazil’s economic and social status. The country was regarded as controversial due to health and safety concerns and its federal government’s instability. It also stressed its inhabitants’ desire for change, one expressed by the International Olympic Committee President Thomas Bach at the closing ceremony.

He stated that “History will talk about a Rio de Janeiro before and a much better Rio de Janeiro after the Olympic Games.” Rio’s organizing committee had an original approach. The members focused on the environment’s protection as the Games’ official theme, and they nearly reached their goal. Global warming prevention was the primary element during the opening ceremony held at the famous Maracana Stadium. Fernanda Montenegro and Judi Dench delivered a speech in regards to the environmental conservation through a poem written by the Brazilian poet Carlos Drummond de Andrade. The Poem was accompanied by a visual representation of a boy being mesmerized by a frail plant making its way out of the hard concrete. During the ceremony, athletes were given a seed of the same type of tree they then placed into various containers to be planted later on to reduce carbon emission. Moreover, at the end of the show, people carrying the large canisters holding the seedlings used them to create the five Olympic rings. The result was both spectacular and unexpected, as the circles were all green and not colored as in the case of other editions. In addition, the majority of materials used by the organizers were either partially or entirely recyclable. The Olympic cauldron was significantly smaller in size, compared to older versions. This way, the organizers intended to reduce the carbon emission. The flames of the Olympic fire were represented through a kinetic structure imitating the sun and its rays.

The silver and bronze medals as well as their ribbons contained recycled materials and the athletes were not offered flowers. Furthermore, components from much of the podiums and various areas were not wasted but used instead in the building of new schools.

A second achieved goal of the 2016 Olympics was the improvement of the country’s infrastructure so not only the environment benefited from these actions but the people living in Rio as well. The capital enjoyed a betterment of its public transport infrastructure. A new metro line connecting Zona Sul and Barra da Tijuca was opened and four new Bus Rapid Transit lines were created as to facilitate the transportation of athletes and regular citizens alike. Rio de Janeiro’s historic downtown has undergone significant changes too. The authorities provided the city with 700 kilometers of public networks for water supply, drainage, gas or electricity. Tunnels, sidewalks and new hotels were all part of the renovation. A study conducted by the Fundacao Getulio Vargas showed that Rio de Janeiro enjoyed wonderful infrastructure development and improvement in regards to its social life during the 2016 Olympics. The city will most likely benefit from the changes it went through in the future as well as a result of the investments made ahead of the games.[1]

More than 11.000 athletes coming from 207 National Olympic Committees took part at the 2016 Summer Olympics. The event was the first both to be held under the International Olympic Committee presidency of Thomas Bach and will take place in a South American city. Here are some facts in brief about the Rio Olympics you may be interested in:

The stars of Rio 2016: a United States dominance

The Olympic Games focus on unity and the tearing down of barriers between nations. However, no one can argue that winning medals is just as important. As much as people would want to believe otherwise, athletes participate in competing with each other than winning. Similarly to most of the past editions, the 2016 Olympic Games’ stars were the United States’ athletes who won an impressive number of 121 medals of which 46 were golden. Most of them were won in the sections of swimming and athletics. Other categories included shooting, cycling, basketball or fencing.

The performances delivered by the American athletes were appreciated by experts and the general public alike. While the number of medals was cumulated to reach 121, the American women were more dominant in regards to the number of gold medals won, one that exceeded that of American men: 27 to 18. The women athletes proved to be the United States National Olympic Committee’s powerhouse. Some of them even set standards for the generations to come and reinforced the belief that sport is not only for men. Moreover, the African-American athletes Simone Biles, Simone Manuel and Ashleigh Johnson were in the spotlight during the entire edition. Each of them won the gold medal in their respective sections: gymnastics, swimming and women’s water polo. Therefore, they showed that “black excellence”, a slogan made famous by web surfers, is an actual thing even in a domain that, historically speaking, has been considered white.

By far the most recognized Olympic and the most decorated one was Michael Phelps who, at the age of thirty-one, won five more medals. A regular participant in numerous events of such magnitude ever since Athens 2004, Phelps came to Rio and showed the world what he was capable of n the spite of the retirement announcement  he made after the 2012 edition.

The 21-year old set one of the edition’s records, finishing in no less than 50.39 seconds.

Michael Phelps announced his retirement for the second time during the Rio Olympics. It seems like this time the decision is a permanent one.[3]

The one athlete that shone even brighter was Olympic rookie Simone Biles who, at nineteen years of age, managed to set new standards in the world of gymnastics. Many specialists deemed her performance as the epitome of perfection. People who saw her executions can confirm there is no exaggeration in that statement. Biles won the golden medal in three categories, namely the individual all-around, team all-around, vault and floor competitions. She earned bronze in the beam as well. Her performance was among the Games’ highlights. From body posture to muscle strength and style, everything was on point for Simone Biles in the 2016 Olympics.

Katie Ledecky is another American swimmer who dominated the categories she participated in. a nine-time world champion, and the current world-record holder in the women’s 400-, 800- and 1200-meter freestyle, Ledecky won no less than five medals at the 2016 Olympic Games. Four of them were golds. She set an Olympic record in the 400-meter freestyle, beating her own previous one, and a world record in the 800-meter freestyle as well. Ledecky was the second most decorated Olympian at the 2016 edition, with four golden medals and a silver one. Michael Phelps, her compatriot, was the only Olympian to have won more medals, five golds and one silver.

Jamaica’s Usain Bolt can as well be considered a living legend. Aside from being regarded as the fastest human ever timed, the bolt is eleven-time World Champion and a nine-time Olympic champion. At the Rio Olympics, he won the 100- and 200-meter gold medals as well as the 4 x 100-meter relay. This made him an Olympic Games gold medal winner for the third consecutive time. After finishing the races, the athlete said: “There you go, I’m the greatest”. Usain Bolt announced his retirement during the 2016 edition after completing his Olympic career with gold medals for every race he participated in ever since the 2008 Olympics. In an interview offered prior to his final Olympics, Bolt stated that he wanted to be as great as Pele and Muhammad Ali. Chances are, most people already have been regarded him as such for many years now. It is uncertain what track and field will do without this record-breaker. Of all athletes, Usain Bolt did not have only the speed and strength but the charisma needed to attract viewers also.[4][5][6]

Controversies, new Olympic and world records, rising stars the 2016 Rio Olympics had them all. Facing concerns surrounding the Zika virus that stopped some athletes from participating, or Guanabara Bay’s pollution, this year’s host country successfully managed to illustrate its promoted motto. A new world emerged amidst arguments of all kinds and left Rio de Janeiro richer and more socially active than it was prior to the 2016 edition. As the tradition requires, the Olympic flag was passed from Rio to Tokyo, the host of the 2020 Olympic Games. During the ending ceremony, Japan offered people a glimpse of what they should expect from this futuristic and innovative country. The Rio 2016 organizers wanted to keep us focused on the present moment and what we can do now for the environment’s conservation. Tokyo 2020, on the other hand, urges us to take a leap of faith and “Discover tomorrow”.