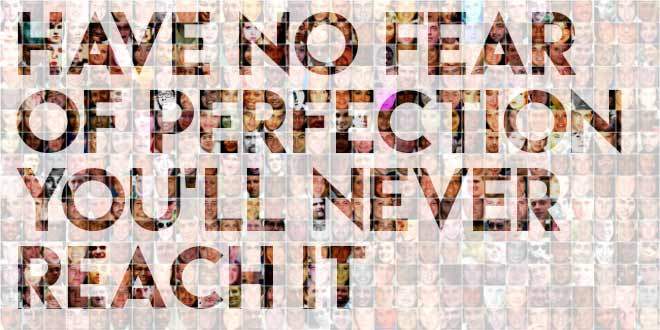 Some decades ago, the Spanish painter Salvador Dali stated a fact that can easily become a general truth in the near future: “Have no fear of perfection, you will never reach it.” Ever since mass-media has become a force in the world, people have been pressured to fit a certain mold as to comply with standards that were, more often than not, not only unreal but also absurd and hard to achieve. Even today, we hear from all sides about how we should act, dress, look like, what we should do and so on and so forth. Almost every person in our lives supposes, one way or the other, they have the right to direct our paths as to reach a comfort zone, one that is under no circumstances comfortable – perfection. Our friends might be quieter, the relatives get involved even when they are not asked for an opinion, and mass media tells us loud and clear that if we want a happy life, then perfection is the key.

There is not much truth to their words, though, as there appear more and more cases of young girls suffering from different disorders such as anorexia or bulimia. Being told that they should look a certain way, and in the absence of guidance from their parents, teenagers all over the world choose blindly to follow the so-called health advice of strangers, allowing them to become an authority in their lives. There are situations when perfection is no longer a goal, but a pure obsession. No wonder that the pressure it puts on people makes some lose their minds in this crazy chase for what is, ultimately, nothing but an illusion.

The need to be perfect appears as a result of wanting to be accepted by those around us, be it our parents, teachers or the stranger on the street we will never see again. Ever since childhood, we are constantly being told that it is for the best to seek to be perfect as if being perfect solves financial problems, the family argues or health issues in an instant.

A child understands perfection as a sweet, quiet personality, as he or she is taught that if something wrong happens, they will get punished.

Later on, in middle school, perfection is synonymous to good grades, being on top of the class, praised by our teachers. In high school, there appears a sudden delimitation between one was taught from early childhood and the sudden realization that adulthood is on its way. Some of the teenagers stick to the good grades system. Others change their perception on what perfection and the importance of being accepted means.

The focus is now on the physical appearance, no longer on one’s intellect because, by practically being bombarded by mass media with all sorts of photoshopped pictures of Hollywood stars, girls learn that beauty exists only in a certain way. Therefore, around the age of sixteen, the desire to be accepted is understood more in terms of how a boy looks at them or if they are appreciated for the way they dress.

Lacking self-confidence, that is antonymous to perfection, and personal standards of what beauty means and how being beautiful feels like, they embrace the ideals of others without questioning whether those ideals agree with actual life.

In this regard, perfection is no longer something one should strive for, as society tells us, but becomes a struggle instead, one which we agree with willingly. Later in life, perfection equals to being married, having a family and trying to maintain a façade of happiness even in those cases in which it no longer exists in that environment. Often, the two partners choose to remain together not necessarily for the family’s wellbeing, but the fear of what others might say in case of a divorce.

While there is tension on the shoulders of men also, women are more prone to feel the pressure of perfection, mainly because all of their lives they have been told that being physically attractive is essential to a woman’s fulfillment. Thus, around the age of fifty when most of the attractiveness tends to fade away, for most of them, perfection bears a bitter taste. In the absence of external stimuli, many women stop looking out for themselves and the way they look like and direct their entire attention towards nephews and nieces.

Why not be a perfectionist

Being a perfectionist does not mean being the best at what one does, because, at some point, perfection is no longer the pleasure of finishing a project, but a struggle to prove what one can do as a means of being praised and accepted. In a way, perfection is the one thing that stops us from being our best. A perfectionist will always wait for the perfect moment to go and ask the pretty girl out, go to an interview for the dream job, wear the expensive dress she bought for when she would lose five more pounds. The thing with waiting for the perfect moment is that it never comes as we expect it, and, when it finally does, we do not know how to take full advantage of it.

There is no such thing as right circumstances for doing something, because when we want to achieve a goal, we act instead of waiting for the stars to align. Chances come and go and, while the perfectionist waits for things to settle in a manner they deem as favorable, there are other more in line ready to react and take that job offer, taking the risk of wearing shoes that do not match the color of the shirt.

Another important thing is that perfection does not mean self-confidence. We see this in the social media where, with the myriad of applications through which we can “expose” parts of our lives, but of course only those we considered to be attractive enough to look at, stories fun enough to be listened to. After all, it is easier to deal with people when we have this boost of confidence that comes as a result of hundreds of likes and comments from people we will probably never see in real life.

The virtual realm makes itself guilty of promoting facets of ourselves as we would like to be, not necessarily as how we are. It is here where the difference between fake confidence and real self-confidence is a major one. The nicely-done make-up is sure to attract compliments, and maybe the new recipe of strawberry cheesecake will be tried by many, but no one guarantees us these things will make us happier or help us face unpredictable situations where the only solution is the way in which we react.

Only good things come as we learn to let go of this carefully manufactured illusion called perfection we so worship. Real life comes with imperfections and imbalances, unpredictable events, and it serves no one to worry about past mistakes or future dreams.

By developing one’s capacity to learn peacefulness of mind in solitude, able to analyze facts and actions not based on their possible outcomes, but on what one can learn from them, people can teach themselves how to be more confident in their own choices, without worrying whether the person next to them approves on what they have done.

While a healthy “dose” of perfection does not harm anyone, this concept is the triggering factor of many health problems among adolescents. Two of the medical conditions that are becoming real issues nowadays are anorexia and bulimia. According to some research conducted by American specialists that one out of every one hundred American teenagers will struggle with one of them at some point in their college years. Eating disorders are more than just a desire to lose weight and look a certain way for the ones around us. They are considered to be obsessive-compulsive disorders, that is, when one suffers from either anorexia nervosa or bulimia, the social influence that was until then the element that fueled the appearance of the situation, is in reality reduced to a minimum in terms of its importance.

Anorexia nervosa is a type of eating disorder that falls in the category of self-induced mental illnesses, being characterized by an excessive fear of food or gaining weight. Unlike other physical and mental disorders that need an external factor to develop, anorexia begins with a conscious decision of not wanting to eat anymore. It becomes dramatic the moment when the person in question is close to reaching a state of starvation because in most cases the process of malnutrition goes on for months and even years before being stopped. Patients suffering from anorexia nervosa do not lose their appetite but consciously refrain from eating because of an irrational fear of gaining weight.

The obsession of being perfect, in most cases after a predefined image promoted on TV or in magazines distorts the teenager’s view on how the body should be like. When the patient does eat, the fear of remains just as strong, so the one choice they have is to enter a process of eating and then throwing out, as a means of not accumulating calories.

This mental disorder that follows the steps of anorexia is called bulimia and is a condition just as harmful as the other one. When looking from the outside, one could argue that a patient with bulimia is sick because, unlike one suffering from anorexia nervosa, their body is rarely thin, but looks rather normal. By constantly eating and throwing out, in the lack of natural processes of ingestion and digestion, the internal organs are drastically affected.

Starvation has many negative effects such as irregular heartbeats, weak physical strength, dizziness and fatigue, slow metabolism, problems with the digestive system, possible kidneys, and liver issues. Except for what has been mentioned, anorexia nervosa and bulimia often lead to depression and can trigger suicide attempts.

When dealing with such cases, it is for the best that the family members, together with the patient’s friends and the doctor should interfere. There is no particular medication for treating anorexia and bulimia as they are not diseases that affect the cells, but rather how one sees oneself in relation to the food. There are treatments centers for patients suffering of one of these two conditions. Still, if not treated in time and with the help of specialists, the patients risks going back to old customs.

Anorexia nervosa and bulimia are born from a desire to be perfect. In a world where almost everybody complains about gaining weight and not being able to look a certain way, the young ones obviously lack the guidance and support they need as to feel accepted for who they are without feeling pressured to be a certain way. In the absence of strong-willed adults that can teach them the value of self-love and self-confidence, teenagers seek refuge in their own minds, ones troubled by this chase after perfection.

Growth, as well as healing, comes only after we step out of our comfort zone over and over again and avoid being caught in social patterns we never agreed upon. If understood as a means to improve oneself, perfection can make one achieve peak productivity and ensures success in all areas of life. Still, this idea of being perfect only goes so far. Often, real life looks nothing like the images in our head, and that can cause one great distress. The good way to walk through life is with a healthy dose of ambition, friends by our side, and lots of self-confidence. At the end of the day, perfection has little to do with the satisfaction of expressing oneself fully, without any restraint, in a manner that is respectful to ourselves and the people around us.

There are far more interesting things in life and being perfect, as weird as it might sound in a society that aggressively promotes it, is not one of them.