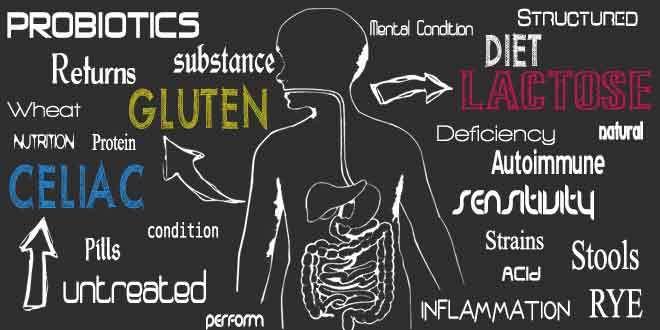 Many probiotics taken for celiac disease contain gluten, research finds. Probiotics, the substances which can bring a lot of advantages to the human body are used in order to alleviate, ward off or prevent the symptoms of a vast array of medical conditions.

On the market, there are countless ‘good bacteria’ based supplements which, sadly, contain gluten, a composite of proteins sourced from rye, barley, wheat and so on. Gluten is definitely to be avoided, as it increases the risk of celiac disease, a digestive disorder which consists of damaging the small intestine and preventing the body from ingesting all the necessary vitamins or nutrients, including calcium, iron, folate or good type of fat.

Furthermore, gluten sensitivity can have very serious consequences as the intestine wall can be severely attacked and other issues can appear as well, including pain in the joints and bones, fatigue, stomach pain, incapacity to perform simple tasks as efficiently as in the past and so on.

Also, gluten may be at the bottom of the IBS or irritable bowel syndrome installation. Solely in the United States, for instance, almost 20% of individuals are affected by this condition. Although appearing to be beneficial to our health, gluten is actually very harmful, being able to bring about tiredness, lack of energy, causes addiction, and, in the most severe cases, can lead to gluten ataxia, a disease which causes irreversible damage to the brain, particularly the function that controls movement.

Gluten is also strongly linked with autoimmune diseases. For instance, it would be important to bring up the Type 1 Diabetes illness, multiple sclerosis, Hashimotos Thyroiditis and much more. The one that interests us today is celiac disease, an illness which triggers malabsorption and severe weight loss, pain in the stomach area, particularly after eating and grave inflammation which consequently leads to the damage of the small intestine’s lining.

Before going forward in discussing how gluten can harm the human body, it is imperative to look at the main advantages of probiotics. First off, it should be noted that probiotics are those substances which can bring great mood, vitality, focus, good functioning of all organs, positive mindset, as well as an enhanced immunity system. It should be noted that probiotics are health boosters, alleviating all immune related issues and helping us digest our food properly. It should be said that the digestive health automatically triggers the overall wellbeing of a person. This is why these tiny organisms of a friendly type are called ‘pro-life’.

The human body hosts trillions of probiotics and it is said that 90% of these are located in the digestive system. The bigger the number of probiotics, the more chances you will get to be 100% healthy. Most common issues with the digestive system are caused by the lack of balance between the good and the bad types of bacteria. And since the most significant part of our immune system is located in the gut area, the communication with the brain becomes more efficient. Whenever the balance between the two aforementioned types of bacteria is disturbed, we become more prone to infections, diseases, illnesses and loose our focus and good mood.

Let’s look at the top advantages that probiotics bring to the table:

Where can you find probiotics?

There are a plethora of supermarkets, pharmacies, nutritional supplement stores which sell probiotic items (supplements for the body which contain other elements as well, including vitamins or nutrients), as well as foods like Kefir, Tempeh, lassi, yogurt, milk, cottage cheese, raw vegetables and so on.

Should you go for a probiotic supplement, then it would be important to note that there are plenty of freeze-dried microbial powders which include dormant tiny organisms. The feasibility is reliant on the exceptional properties of microscopic organisms, how they are delivered (either in tablet form, containers, loose powder and so on) and also on the manner in which they are packed (free in a bottle or separately in foil wraps).

It would be imperative to note here that, whenever probiotics contact dampness, oxygen, and warmth, irreversible damage to microbial cells happens. Also, it should be stated that, when you wish to look for probiotic supplements, attention must be paid to the instructions on the label and make sure that it ensures viability. The expiration date should also be taken into consideration.

Probiotic rich foods, as well as supplements, are being purchased by individuals who wish to either prevent or completely alleviate the symptoms of celiac disease. Being found in formulas, tablets or bars, probiotics can be 100% effective in counterattacking the damage provoked by celiac disease. Sadly, it has been found that some forms of probiotics can contain gluten, bringing a true paradox to the table.

This is the one that influences the appearance of celiac disease and it is found in the probiotic supplement that was supposed to treat such conditions. But let’s get into more detail as to why nutritional items contain gluten at all.

More and more companies put either barley or wheat in probiotic supplements, even though it is already a known fact that individuals suffering from celiac disease use natural products in an attempt to restore their immunity and their health. Dr. Green of Columbia University discussed the matter at the Washington Digestive Disease Week meeting, outlining how baffled he is about the matter at hand.

He claims that the industry is indeed poorly regulated and that gluten free labels have to be questioned before consuming the nutritional product. From pills to yogurt, kefir, granola bars or syrups, probiotic items appear to multiply on the shelves of stores or in the online environment.

On the other hand, MD Stefano Guandalini claimed that he thoroughly researched the market and found that, on average, solely 2 out of 15 probiotics labeled as gluten-free contained a bit over 20 ppm of the protein, this being the cutoff of FDA. It is already known that any items under the amount of 20 parts per million (ppm) are viewed as safe to ingest by a person diagnosed with celiac disease. For supplements, however, he stated that the worst case scenario includes items containing 100 ppm of gluten.

This amount is indeed harmful to people suffering from celiac disease. It would be imperative to note that the risk exposure, according to Guandalini, is the following: gluten in proportion of 10 milligrams per day. And for those products which contain 100 ppm of gluten, a person would have to consume more than 100 grams to reach an alarming result. To be in danger, a person would have to ingest 100 probiotic pills, as one of these normally weigh 50 milligrams up to 1 gram.

The noted doctor claimed that there are no risks to people who have celiac disease. However, if they do pass that line, they can be in danger. Nonetheless, he still thinks that the FDA ought to apply the same standard labeling for gluten-free products to these items as it is the case with food, in order for people to know exactly what they are taking.

Since gluten presence is indeed pervasive, it automatically does not come as a surprise that the majority of products actually contain the disease influencing substance. However, despite all the hype regarding this issue, he still finds that standardizing the labeling would suffice.

Dr. Samantha Nazareth from Columbia University tested the validity of gluten-free items found online or in stores. She wanted to see exactly how the composition exceeded FDA regulations and if the gluten-free label actually does meet the standards.

She and her team discovered that 12 out of the 22 included a detectable portion of gluten. Of the total of 12, 8 were in the gluten-free label category, whilst two exceeded the FDA labeling standard. Despite the fact that the vast majority of items were below the given threshold, according to Samantha Nazareth, one should not be totally sure that the product is completely safe for consumption.

What is more, it is probable that the accumulation of gluten from each capsule can damage the body functions of celiac disease patients. Another important thing worth noting here is that, according to media speculations, there will be more stringent regulations in probiotic supplements composition.

This will be done in order to ensure that the consumer is not getting gluten without acknowledging it. Furthermore, in what concerns the consumer, it is advisable to carefully read before taking any supplement or nutritional product containing probiotics. This rule should be applied before deciding to take any type of nutritional supplement or new healthcare product.

In order to address the situation of probiotic supplements for celiac disease containing gluten, the Celiac Disease Foundation has taken some steps which include demanding both the state attorney general, as well as the FDA that labeling regulations be stricter. This measure is absolutely essential in the long run for PPRN, an abbreviation which stands for patient-powered research network because patients will be enabled to enjoy a healthier life.

Furthermore, they will be able to contribute significantly to research, as well as engage in clinical trials. Being funded by the Patient-Centered Outcomes Research Institute, which, in turn, has been set up by the Affordable Care Act, the patient-powered research network will enable CDF constituents to boost medical research and to improve the entire system of nutritional supplements for celiac disease.