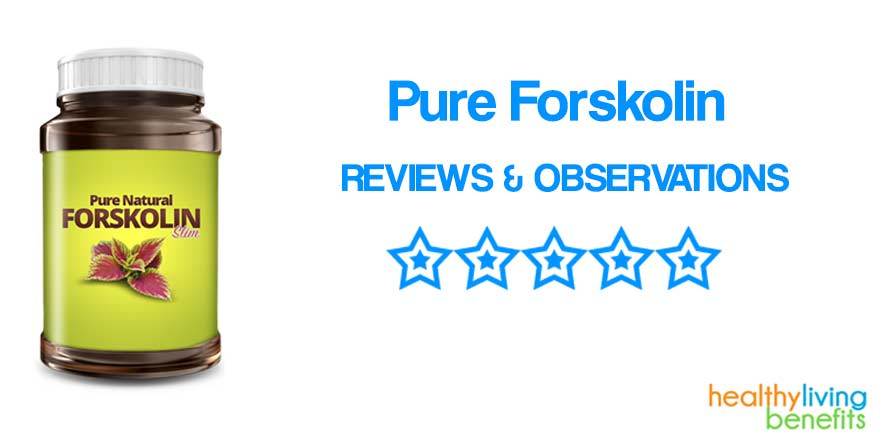 Forskolin extract has been the talk of the town for about three years now, ever since it was featured on a popular daytime TV show, popularity to which even “almighty” Google can bear witness to. This reputation is the result of a claim few dietary supplements can make: losing weight while not embarking on a serious exercise regimen.

Many manufacturers have flocked to include forskolin extract in existing recipes for weight-loss supplements, and even more, have launched their take on forskolin-starring products.

In this review, we will be having Pure Forskolin Extract in our sights, advertised as a premium fat burner, an entirely natural pill containing 20 percent pure forskolin.

Nevertheless, the claims surrounding this particular product will only be our starting point, as the “forskolin fever” deserves an in-depth analysis, to see if there is any scientific evidence (or at least grounded scientific speculation) for this consumer’s phenomenon to warrant such a nickname.

To this end, we may delve a little bit into some biochemistry that is never much pleasing to the eye, but if you want to do and/or know anything of purpose, at some point, you will have to get your hands dirty.

Where Should Forskolin Take You?

Come to think of it, the case in hand involving Pure Forskolin Extract is a textbook example of trying, without putting too much effort into it, to cash in on a media-induced trend. The only hard information about any manufacturer present on the website is a phone number, to be found in the “terms of service” section in the context of return policy. Even the timid social media buttons do not lead anywhere.[1]

No proper name or address should have already been a deal breaker, and to lead things into the realm of the grotesque, even the price of the product is not prominent. Only after completing the form does one find out that a single bottle (good for one month of supplementation) costs a whopping $69.94, though the plans for a larger quantity of the product make it slightly more affordable.

We have encountered complaints as to the inexistence of the touted 30-day return policy, and the fact that every person who makes a purchase is included, irrespective of their choice, in a payment plan. In short, you should buy your forskolin elsewhere. That being said, this website makes all the claims encountered in the cases of most such supplements. Here are the main advertised benefits one should reap from a regular forskolin intake.[2]

Furthermore, forskolin acts as a catalyst in the synthesis of cAMP (from ATP – adenosine triphosphate) – a biological compound with numerous functions, among which there is the stimulation of thyroid hormones. This hormonal overproduction also leads to the shrinking of fat tissues.

Therefore, forskolin has a two-pronged action which should help an individual in burning more and storing less fat than is normal, in the absence of extra physical exertion.

We come to a point where the uncertain dimension which exists in the case in every dietary supplement ramifies. If indeed, forskolin increases testosterone, then the question of dosage gains a vital importance. Likewise, a difference in the intake for men and that for women should be made. But that is getting way ahead of ourselves!

These three points are the chief arguments forskolin supplement manufacturers tend to revolve around. However, all parts of the Plectranthus barbatus (as is the official botanical designation of the Indian Coleus plant from which forskolin gets made from) have long been used in the traditional medicine of the peoples inhabiting the areas where Coleus is indigenous, the locations around the Himalayas and Southeast Asia.

According to webmd.com, there is limited scientific evidence (that is “insufficient evidence” in their lingo) that any extract from Plectranthus barbatus (root, leaves, or others) can help with obesity and weight loss. On the other hand, there is markedly more evidence (mainly documented cases and practices, rather than professional and irrefutable clinical studies, though) that forskolin from Indian Coleus could help with the following conditions:

Naturally, in the context of asthma, forskolin needs to be inhaled, not administered orally or intravenously.

For these conditions, the effectiveness of forskolin is more a probability than a possibility, with the caveat that medical professionals are still uncertain about the optimal dosage for each disorder. Some argue that forskolin is definitely a potent substance and should never be taken without consulting a doctor first, an aspect that applies in particular to at-risk individuals – pregnant or nursing women, children and the elderly, those with more than a few documented allergies, and people with chronic ailments. There is a substance called colforsin, derived from forskolin, which has exhibited dangerous adverse reactions – arrhythmia and tachycardia.

A warning sign has to be raised for forskolin, and for all dietary supplements for that matter. Because the FDA does not regulate them, the actual purity and concentrations vary considerably from one supplement manufacturer to another, supposing that the information on the label is correct. Nevertheless, in the case of forskolin, most manufacturers take their cues from the most often cited obesity-related study (which we will discuss at length in the following section) and sell 250 mg capsules with 20 percent “pure” forskolin extract (to be taken once a day) or 10 percent extract (to be taken twice daily).

As mentioned, in certain regions, forskolin (or to be more specific the Indian Coleus root) has been touted as a cure for a wide variety of ailments – from insomnia, menstrual pains and various heart disorders to cancer. In the next section, we will list and examine the current thesaurus of scientific studies relating to the potential of forskolin extract to aid individuals committed to weight loss, and also review some research related to other benefits one could derive from forskolin supplementation.

Relevant Studies on the Effects of Forskolin Supplementation

Most, if not all manufacturers’ presentations focus on the obesity reduction effect of forskolin, citing a University of Kansas study, whose results were made public in 2005 in the research journal published by Obesity Society. Though the Pure Forskolin Extract pill does not reference this paper anywhere, it certainly does allude to its conclusions.

Naturally, many people who will read this article are familiar with the dubious practice dietary supplements companies have of basing their claims on obscure findings of even more obscure researchers from obscure institutions. This is not the case, as this particular study has been referenced in the academic community dozens of times since then.

Thirty obese and overweight men, between 20 and 35 years old, were divided into two groups for a period of 12 weeks. Half of them were given 250 mg of 10 percent concentration of forskolin two times a day, while the other half received a placebo. The results were:

The contextual conclusion reached by the researchers at the University of Kansas was that, for overweight and obese adult men, forskolin might be considered a long-term solution with encouraging (if unspectacular) results. This is because, forskolin’s mechanism of action involves the constant stimulation of cAMP production, a path which previous weight loss solutions were unable to undertake.

Another study which inquired on the weight management properties of forskolin was published in the same year in the Journal of the International Society of Sports Nutrition, by researchers at the University of Memphis. The focus of the study were moderately overweight women, between the ages of 18 and 40.

The other details of the experiment were almost the same as the University of Kansas study focusing on men (of roughly the same ages) – 10 percent concentration of forskolin extract, instructions to ingest two capsules each day for 12 weeks, one group was given a placebo and one the actual pill.

While the previously cited study yielded some interesting and cautiously optimistic results regarding the possible inclusion of forskolin in weight management regimens in men, this experiment led to no discernible differences between the individuals placed on forskolin supplementation, and those in the placebo group. The paper does state in the concluding paragraphs that further inquiry is necessary for a potential classification of forskolin as an appetite suppressant because it seems that fewer women had an increased weight in the group which was administered the active substance. For the moment, these two studies are the most referenced and, quite frankly, the benchmark when one discusses the weight loss properties of forskolin. The interesting aspect is that the two experiments were conducted independently of one another, though the University of Memphis paper does acknowledge the University of Kansas study. The results are provisional and should not have led to the media-induced forskolin fashion, but stranger things have happened.

If this is the scientific evidence which focuses directly on forskolin and weight loss, many more other studies have been conducted with indirect factors in mind.

The results point to the use of forskolin as an appetite suppressant. We have mentioned many times the increase in cAMP levels due to the Indian Coleus extract’s action, and this particular study confirms the same sequence of effects. Nevertheless, the rats influenced by both forskolin and rolipram showed the most promising results than all other groups. Nevertheless, the extrapolation of these results to humans is quite a longshot.

As for the much too general claims that forskolin manufacturers make regarding “improving your general well-being,” a 2011 study was performed on elderly patients (between the ages of 50 and 80) with hypertension who were being treated at the time at the teaching hospital of the Gujarat Ayurved University in India. Forskolin has been used in India to treat all kinds of cardiovascular problems since before the current era.

The problem with the paper documenting the study is that it does not state clearly the exact amount of forskolin extract used, although it is implied that the standard 10 percent purity was administered in the same fashion as in the first two studies we have cited in this section.

In contrast to those studies, the subjects in this one followed the usual diets advised in hypertensive patients, coupled with moderate exercise (for their respective ages).

The results were more than impressive, with a 7 to 14 percent relief in systolic blood pressure after only one month of including forskolin in their diet. A less significant effect, which is more likely a result of the food restrictions and exercise concerns the minimal reduction in cholesterol levels and total body mass (2 to 5 percent).

The Bottom Line on Forskolin

The two previous sections of this article have dealt with the information about forskolin that sits squarely in the realm of possibility and probability, not wild speculation because that would probably take entire tomes. So, is forskolin worth a try in your weight loss efforts?

The short answer is yes, but do not place unrealistic hope in it. As we have seen, clear-cut weight loss occurs only in overweight men, that are relatively young. And that is probably because they are still hormonally capable of having a dietary agent increase the production of testosterone, hence the increased muscle mass.

Regarding the other, rather general benefits forskolin might bring to the table, it might be an alleviating factor if you suffer from glaucoma or high blood pressure. Maybe the problem lies with the dosage. On the other hand, upping the dosage might create nasty side effects, that with the current recommended intake no troublesome adverse reactions have yet been reported.