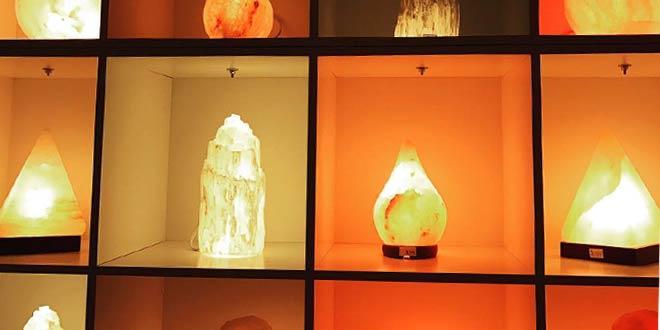 A salt lamp, also known as a Himalayan salt lamp, is a large piece of Himalayan salt that strongly resembles a rock in aspect and which contains a bulb meant to illuminate. Most of the products sold on the market are a solid-shaped one-piece, but there is a variety of ways in which the salt can be put as to obtain a more sophisticated aspect. Not only are they some nice interior decorations which turn a room into a more intimate space, but they are also natural sources of light.

The Rise of Holistic Healing

What westerners acknowledge nowadays as holistic healing is an extension of the Eastern world’s older traditions. To offer you an example, see the ancient Chinese medicine or the Indian Ayurvedic one. Some were based upon how the body interacts with the external environment through the use of herbs. In China, the local doctors were specialized in localizing certain energy centers which, when activated, were believed to provide people with a better health and a stronger physique even well into the old age.

More than concentrating on the physical body, these medics chose to focus on one’s emotional well-being and spiritual status. They thought back then (a belief that is currently being reinforced) that when a disease occurs, the body would be the last one affected. These doctors had the faith that an illness would first impact a man’s emotions (the spirit), then affect the mind (the reason), and only afterward become visible as to be treated. However, their purpose was to avoid the diseases spreading up to that point, and instead support the people’s emotional health by using various methods of which many are gaining more popularity by the day.

Holistic healing played a huge role in the Indigenous societies on the American territory as well. Still, many of them seem to have taken things one step further by claiming that everything was connected. Thus, a man’s health was strongly dependent on the environment he lived in, and, on a larger scale, to the entire Universe.

Even Socrates whom many of us are familiar with stressed this idea of a whole that needed to be healed, even if only one of its parts was injured.

But what is with this sudden interest in alternative medicine at the present moment, given that many of its methods are either unapproved or do not enjoy much scientific evidence in regards to their true effectiveness? Everywhere we go, we are bound to see or hear at least once a day the terms “organic” or “bio.” In spite of the majority of Westerners still deeming it as not being trustworthy due to a long history of superstitions, one cannot deny holistic medicine’s effect, be it even a placebo one. People have begun distrusting today’s medical treatments where chemicals are the main part and have headed towards more natural practices. Practicing yoga or meditating, using incense stick and semi-precious gemstones to balance the energy inside our bodies are only a few of the habits one integrates into his or her daily routine for better health. Of all the objects used to enhance the method’s impact, salt lamps are easily some of the most recognizable ones. People do not necessarily buy them for their health-related benefits, but because they look beautiful and emit a dim light which often offers a soothing sensation.

Why Should You Own a Himalayan Salt Lamp?

What sets these lamps apart from other objects used by people interested in the holistic medicine is the fact that they are made of Himalayan salt, one that many specialists, as well as the residents in the Asian regions crossed by the mountains, regard as the “white gold.” Still, what makes this type of salt so interesting in comparison to that extracted from the ocean, one might wonder. Firstly, the Himalayan salt is hundreds of millions of years old. According to numerous research projects conducted in the area, more than 250 million years ago, huge portions of sea salt have been covered with lava which then solidified. This acti on combined with the numerous layers of ice deposited on the plate tectonics kept them well-protected from the external factors up to the present day. Currently, many people consider the Himalayan salt as being the purest form of salt out there.

Secondly, its chemical composition is made of no less than 84 natural trace minerals of which many are found inside the human body as well. Some of the most important include calcium, magnesium, potassium or sodium chloride.

Thirdly, all its minerals are extremely fragmented. This means the body absorbs them faster when we use the salt to season our food. Also, because they are so small in size, their atoms move a lot faster than in the case of regular salt, so more energy is stored in the Himalayan one. For a better understanding of how a Himalayan salt lamp can benefit our health, we have listed below some of the advantages of its main material, the Himalayan salt:

Unlike the salt present on the market in our days which is strongly processed, thus losing much of the essential minerals, its Himalayan counterpart is a real miracle of nature. Therefore, why should the salt lamp not have the same benefits, in spite of it helping us on the outside rather than on the inside? The majority of rocks mined to obtain the material used in the manufacture of salt lamps originate mainly from Pakistan, but other salt mines can be found on Iran’s or Poland’s territories. Most of them are pink or orange in color. However, there is also a variety of white salt lamps which are rarer and therefore much more sought after by people interested in them. Specialists in the holistic medicine advise us to own not just one but several such lamps and place them throughout the entire house. Far from being harmful, thanks to their chemical structure and mechanism of action, they can only help our health in the long term. The following are the most important ways a salt lamp can benefit you, should you choose to buy one. Keep in mind one important aspect: none of the things listed below have been properly studied as to claim they are real. In spite of this, many of those who own one such object have stated that the salt lamps indeed work.

It is generally believed that a salt lamp can:

Some people are more skeptical when it comes to a salt lamp’s health benefits. However, even if researchers need to conduct new studies as to establish once and for all the true role of a Himalayan salt lamp, there are some things about it that can convince one buy it such as:

Also, it is said that each color has a particular advantage to it:

It is true there are not many specialists that support the salt lamp’s use by people interested in improving their physical condition. Moreover, some of them claim that the lamp only has a placebo effect. However, judging by the feedback offered on the subject, mostly a positive one, it is safe to assume that the object is likely to help more those who appreciate holistic medicine rather than all the other customers.[2]

Where to Place it for Maximum Benefits? A Himalayan salt lamp is not a Feng Shui object that you should put in a particular area of your house and a specific position for it to function. On the contrary, people who want to buy just one ought to think twice. Thanks to its mechanism of action according to which the lamp can release negative ions as to counterbalance the positive ones’ effect, people can make better use of it if they choose to buy one for every room in their house. Place them near any electronic device or in an area where you spend most of your time such as the living room or even the bedroom.

There are smaller as well as larger ones, depending on the room’s size and the owner’s personal taste. Pay close attention to the product’s label that should indicate what you are holding in your hands is made of 100% Himalayan salt. Trustable manufacturers take good care of this aspect so that the customer will acquire only a high-quality, authentic object. Also, look for lamps with a smoother surface which allows for better particle absorption.

Many of us know how a salt lamp looks like. Light pink or orange in color and with a rock-shaped aspect, salt lamps can nowadays be seen almost everywhere. However, if one wants to buy an authentic object and know more about it, then he or she ought to try a holistic health store. There, not only will they find out more about its significance and how it works, but will also be surrounded by hundreds of similar objects that are believed to help the human being on an energetic level. In spite of being in the 21st century, our society seems to be more and more attracted to alternative medicine methods, and for a good reason. Holistic healing might even experience its biggest breakthrough in the following years. Proof in this regards is the fact that it is gaining more followers by the day.