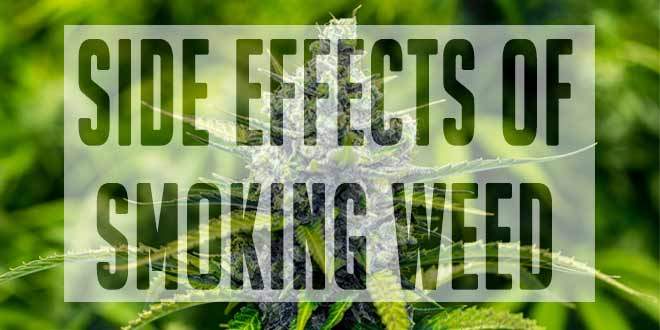 Risks of smoking marijuana had been debated since people are concerned with their loved one who are consuming it. Marijuana, or Cannabis, is prepared from the plant of Cannabis. Although, the plant has two uses, as a drug and as medicine, usually it is used as a psychoactive drug.

Out of curiosity, almost everyone tried it and according to WebMD, 1 out of 3 Americans smoked it.

World Drug Report 2015, published a study about the number of consumers. In 2013, their number reached more than 128 million people, so about 2.5% of the global population, between the age of 15 and 65.

If you only smoked it once or a couple of times, you should not worry about side-effects, but if you are doing it on a regular basis, then you should know about short and long time side-effects.

Cannabis contains an active ingredient, THC, and along with other ingredients, it will make you feel high. Marijuana will affect all your organs, will go through your nervous, so basically, nothing stays untouched.

There are two ways in which you can consume it; one is obviously smoking it (by burning dried leaves or seeds) or by adding it to cookies, cakes and all sorts of sweets.

If you smoke it, the effect will be quicker because it will enter faster into your bloodstream. If you choose to eat it, then it has to go through your stomach, delaying the euphoric process.

People are smoking it for the little period when they feel stoned, meaning they feel happy, and they have an increased libido and appetite (that is why they are extra hungry and will eat almost everything when they are high). Depending on the dose, they can see illusions and perceive reality in a different view.

After the up effect disappears, besides the short-time effects listed above, there can also be a decrease in short-time memory (meaning that they will probably forget some parts of what they’ve done in that time or even all memories about it).

They can feel their mouth dry (they will feel extra thirsty), concentration can disappear at all (they won’t be able to focus on a simple task).

If those are the short-time effects, let’s see how marijuana affects the body and the brain on a long shot.

If you are addicted to marijuana, it is better to seek advice from a competent organization. Long time side-effects can be deadly because they affect the whole body and its organs in depth.

Consumption of cannabis reduces resistance to common diseases, such as flues, seasonal colds, bronchitis, etc. In fact, it lowers the immunity, so your body won’t be able to fight them anymore. They will have colds more than 1-2 times per year (or often), and the effects of the cold will be severely increased, leading the patient to consult a doctor for antibiotics.

If the infection if not treated properly, the cold can invade all your head, not only the lungs or the tonsils, spreading the disease through the ears (you can develop otitis) and up to the eyes (conjunctivitis).

Conjunctivitis and otitis usually come in a pack, so while you are having a cold, they will come extra.

As with the colds, the immune system is not functioning properly, which is a long-term side-effect. The lower it drops, the higher the chances are for the consumer to develop easily all kinds of diseases, from the most common ones to ones that can threaten your life.

They can also develop allergies, as a reaction to the malfunction of the immunity system. It is all a chain, and once a piece is broken, they will all fall.

Once the curiosity on a human being is high, it pushes him to try new things. Teenage years are the most curious are rebellious, and the rate of drug consumption is high among teens.

One side-effect seen in teen is an unhealthy growth. Since boys are growing until the age of 21 and girls under the age of 18, some aspects of the growth will be affected, such as improper height, fragile bones, lack of muscular tissue, and so on. The importance of a proper growth will be seen later in adulthood when they will experience unexpected problems.

In women, the situation is not so grave, but it can reach even the possibility of a higher level of infertility. Females need male hormones in their ovaries to a better ovary function, to achieve more chances of being pregnant.

Stephen Hammes, M.D., Ph.D., Louis S. Wolk Distinguished Professorship in Medicine (Endocrinology and Metabolism) at the University of Rochester Medical Center said that “The need for certain levels of male hormones in the female body and the strong influence these hormones have is often underappreciated,” and “Our findings open up a new line of research into how we can regulate male sex hormones, specifically in the ovaries, to improve fertility”.

Teenage women precipitate their future descendants by smoking cannabis. The reduction in male hormones will only be helpful in women with polycystic ovary syndrome, which affects around 5 to 10% of the global population.

Sexual capacity is reduced in men. If the drug gives you an increased libido when you are under its effects, after this up feeling, your libido will be reduced considerably and can have minor(or not) effect on your potency.

Almost destroys concentration. Many car accidents happened because of the lack of attention the drivers had when decided to drive a vehicle. A study published by the American Journal of Epidemiology concludes that car crashes made by marijuana consumers had tripled their number in the last years.

At first uses, it may not be noticeable, but when you are a regular user of marijuana, you will find that you are not able to focus on simple tasks, like adding some numbers or check the change you receive from the cashier at the supermarket. Concentration can be helpful in many areas, at studying or performing anything.

As a plus, it shuts the memory from retaining valuable info and can affect some student’s grades seriously. And while we are talking about the brain, we can add the fact that it may lower your IQ. It depends on your age tho, and it inflicts the teenagers and the young adults. Dr. Paula Riggs, a professor at the University of Colorado, thinks that “It disrupts the development of circuits, the latest study shows that regular use when you’re an adolescent is associated with a 6-to-8 point reduction in IQ.

Good moods will disappear. Lack of motivation and apathy takes in. Consumers experienced bad feelings, some linked to depression. They will lose all motivation to study, to work or to get out of the house to socialize.

They will lose valuable contacts if they continue to consume pot. Along with apathy and lack of motivation, comes changes in personality.

If they were a sincere person, they would become more indifferent; they won’t care so much about other people’s needs.

If they were already more distant and introvert, they could go deeper into the same area, or they can become more sociable, breaking their barriers.

An ex-addict of marijuana spoke about how did he feel for a time and his response was posted on drugfreeworld.org: “Then I started having negative feelings about myself and my abilities. I hated the paranoia.1 I hated looking over my shoulder all the time. I hated not trusting my friends. I became so paranoid that I successfully drove everyone away and found myself in the terrible place no one wants to be in—I was alone. I’d wake up in the morning and start using and keep using throughout the day.”.

Paul above was talking about paranoia, which is a side-effect of those who love marijuana and can’t stop smoking it. This effect is a lack of the ability to see things clearly.

From here, all can be linked to insecurity, of self-pity, of not trusting your person and the others. Pot can damage relations(even long term ones) for good.

Cardiovascular diseases risk is increased. In the moment of consumption, your heartbeat starts to grow, and it can reach alarming levels, the one an athlete can reach during an intense workout. The risk of a heart attack is just one step from there. Depending on the quantity of the dose, the heartbeat can be higher or lower.

As any other tobacco, it will hurt your lungs because you are smoking it. It you are eating it through brownies or cookies, you will avoid putting your lungs in the tension of smoke. But not only the smoke causes damage to the lung, but also the contents of marijuana. A joint of pot is stronger than a dozen cigarettes. You lungs are exposed to infections, but it is not known yet if cannabis can produce lung cancer, according to the National Center of Drug Abuse.