Synapsyl Reviews | Is it a Scam or Legit? 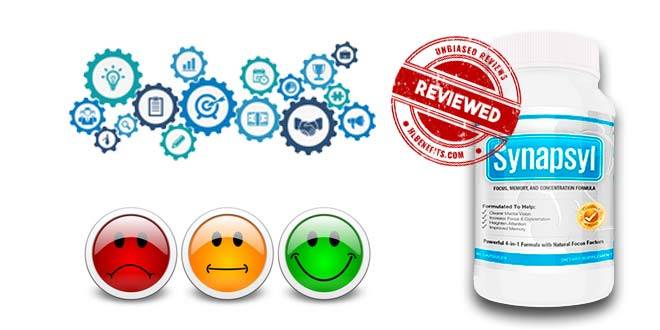 On the official site of Synapsyl the first information on the pill states: “Scientists are calling this smart pill ‘Viagra for the brain’”. While it may be true, although more studies are to be conducted on Synapsyl’s health benefits, a famous proverb says that “self-praise is no recommendation”. The pill is not the first one to receive this title and will not be the last one either. Other supplements such as Adderal or Cogniflex were said to have extraordinary properties at the time of their release on the market. Their users have confessed being sometimes disappointed by their effects. What may make a difference between Synapsyl and other smart drugs is that its compounds blend well and do not cancel each other as in the case of many products.

Synapsyl is a nootropic supplement. Nootropics are a relatively new side of medicine that specialists currently study to acknowledge their full range of benefits. Research projects conducted on these chemicals are relatively new since nootropics themselves were not exactly a concept until 1972. The year marked Piracetam’s discovery, a drug able to improve memory and cognition. Corneliu Giurgea, the father of Piracetam, developed a set of conditions that must be fulfilled for a drug to fall into this category.

A nootropic supplement should enhance general cognition and protect the nervous system against toxins, free radicals or the risk of oxidative stress. They are supposed to improve the thinking process, making it clearer. Moreover, they should be non-toxic, non-sedative and have no side effects. From this perspective, many of today’s supplements considered being nootropics only bear the name. They are closer to the definition of smart drugs. Still, since the label of “nootropics” helps the sales most manufacturers prefer this term. It is unclear how nootropics function. Some specialists affirm that the substances have an impact on protein synthesis, one similar to the neuromodulation process. Neuro-modulation occurs when neurons use various chemicals to support a healthy brain activity. The majority of ingredients found in Synapsyl occur naturally in medicinal plants with alleged healing capacities. This element makes the pill rather promising when compared with similar supplements.

Synapsyl is a relatively new supplement on the drug market, being released in 2014. Like most nootropic supplements, it is supposed to improve memory, thinking, focus, creativity, energy levels and offer a cognitive boost. Its manufacturers claim that the pill is 100% natural and it can increase blood flow to the brain and the number of neurotransmitters. This means Synapsyl can enhance overall brain activity and fight the side effects of age-related mental decline or oxidative stress. The results are presumably quick to appear. The customers quickly notice them.

The pill has the advantage to contain chemical compounds that enter the bloodstream without much p difficulty and can reach the nervous system in a matter of minutes. The supplement is produced by an Anthea Limited, a Unites States based company that uses mainly herbal and nootropic ingredients. Like all supplements, Synapsyl is not designed to cure or alleviate the symptoms of severe medical conditions. It can only supply the body with chemical substances. There is no scientific proof of Synapsyl’s effectiveness and the little evidence people have on its properties is insufficient. Unlike prescription drugs, the product has not been seriously tested either for safety nor efficacy rate by the United States Food and Drug Administration. Therefore, there are few reasons why people should fully trust what its producer states on the supplements’ official website.

According to Synapsyl’s web page, the supplement contains ingredients from sources with compelling benefits for one’s health. Synapsyl is composed of:

Synapsyl also contains two common additives, namely Silica and Magnesium stearate as well as gelatin. The manufacturing company officials affirm that the ingredients were carefully chosen and integrated into the supplement’s composition as to provide maximum efficacy. The ingredient list is present on Synapsyl’s website only. Some of its compounds can still interact with various medications or have other side effects in spite of being listed as natural. There are people sensitive to individual constituents who can become potential Synapsyl users. It is good therefore that its manufacturers are honest enough as not to claim the supplements does not have a downside to it like in the case of other companies.

Synapsyl is a twice daily supplement created with the intent to benefit the brain functions and improve the quality of life. It is compulsory to follow the recommendation as to avoid possible issues that may occur as a result of an overdose.

The ingredients present in Synapsyl’s composition are beneficial when used separately and consumed in various quantities by a specialist’s advice. When combined in the form of a supplement or us randomly used, they can become dangerous. Any excess should be avoided. The following are Synapsyl’s ingredients, as stated on the product’s website:

Buddhist monks regard it as sacred due to its healing properties. The tree is extraordinarily resistant to extreme environmental conditions so it is only natural for it to have strong curative capacities. Ginkgo biloba is rich in terpenoids and flavonoids, two chemical compounds with antioxidant properties. They are mostly present in fruits and vegetables that specialists deem as the healthiest food sources. The substances present in Ginkgo Biloba’s structure indicate that the tree can be trusted. Studies show that supplements rich in Ginkgo Biloba may be efficient in preventing and treating Alzheimer’s disease.

Oxidative stress’ effect on brain’s structure and its influence in Alzheimer’s disease development is a studied theory at the present moment. Specialists affirm that free radicals and toxins can damage the nervous system and eventually lead to Alzheimer’s disease. Of all organs, the brain is the most sensitive to their negative impact as it does not allow exogenous antioxidants to fight the toxins. Supplements containing antioxidants like Ginkgo Biloba’s may be a good choice when facing oxidative stress. Moreover, supplements with flavonoids and terpenoids can improve memory and prevent symptoms related to the aging process.

There is no evidence that cow brain based phosphatidylserine has side effects. Some producers still use it. It is important for the company producing the supplement to mention its origin on the label or website. Some customers are vegetarians that refuse animal cruelty of any kind. Even so, Synapsyl can as well be disregarded by vegetarians and vegans. The supplement’s capsules are made from gelatin that is an animal based product.

Experts have performed numerous tests on each of Synapsyl’s ingredients and they are all safe to be used. The compounds were tested separately and a set of properties and health benefits was established for every one of them. Evidence shows that there is a need for certain quantities for them to reach their full potential. It is unsafe to assume they can do so in Synapsyl.

The majority of ingredients in Synapsyl are natural and present little to no side effects. Many of them, bacopa monnieri and Ginkgo Biloba in particular, act like brain tonics. Research projects indicate that most if not all Synapsyl compounds increase the blood flow to the brain as well as the number of neurotransmitters. The nervous impulses are more quickly sent this way. Synpasyl is a nootropic supplement and helps the user enjoy various benefits such as better general mood, healthy brain activity or increased productivity.

Synapsyl has no scientifically proven side effect. Nonetheless, some of its constituents can raise questions in concern to possible health risks. People may present allergies to any of them. It is safe to read the supplement’s label before buying it to avoid potential complications. Bacopa monnieri can produce stomach cramps or nausea when used in high doses. Ginkgo biloba may lead to vomiting or dizziness. St. John’s wort increases photosensitivity so Synapsyl should be avoided by people who are regular users of tanning booths or stay in the sun for extended periods. Also, the herb interacts with anticoagulant medications. There is a high risk of increased bleeding if combined with such treatments. Synapsyl may affect fertility. There is no clear proof related to this fact but it is better to resume from taking the supplement when trying to conceive children. There are other supplements on the market that can be more safely used. It is important to consult with a specialist before starting any treatment, including one with nootropic supplements.

How can you buy Synapsyl?

Synapsyl is not an over-the-counter supplement and can be purchased through its official website only. A bottle containing sixty capsules costs $49.95. A package with three bottles costs $119.91 and one with five bottles is sold for $149.85. While the last two options may seem more profitable it is advisable to start with a single bottle. This way the customer can test the supplement and see if it is trustworthy. Anthea Limited, Synapsyl’s manufacturing company ships it both in the United States and worldwide.

The shipping fee is $9.95 which is relatively high for delivery on the United States territory. The same fee applies in the case of international shipping. Larger orders are available with free delivery as their price can compensate for the additional expense. The bottles are placed in packages and shipped within 24 hours since placing the order. Delivery usually takes less than seven business days. Synapsyl has a thirty-day money back guarantee. The period is the same for all orders, regardless of their size. Foreign clients are less likely to return the product if they are not satisfied with it. This happens because international delivery can take a few weeks so there is virtually no time to receive the package, test the supplement and, if not pleased, return it to the company.

Customers should pay close attention when placing orders. It is ideal to start with small orders both in the case of United States citizens and foreign clients.

In spite of what the manufacturing company states on the supplement’s incredible properties, Synapsyl is no different than most nootropic supplements on the market. Many of its compounds are active constituents in many other drugs as well. What distinguishes Synapsyl from the rest is its chemical composition. Synapsyl is made of no less than eight substances with proven action on the brain structure and nervous system functions. The product is well put together with its ingredients blending nicely without interfering with each other. Synapsyl is practical for people who want to improve memory, focus and enjoy higher energy levels.