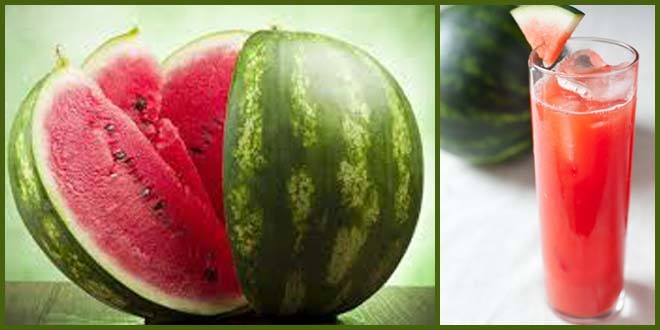 Watermelons come from the Kalahari Desert in Africa thousands of years ago and the first fact to support this theory is that it is there, in the Southern Africa, where you can see the highest abundance of wild species with all kinds of different shapes and sizes varying from extremely sugary to sour.

Their relatives are cucumbers, pumpkins, squash, zucchinis and cantaloupe melons all members of a big happy family – the Curcubitaceae. From their initial birthplace, they travelled in time to Asia, Europe and North America receiving a warmth welcome for its summer refreshing vitamin loaded juicy attributes. Up to 92% of the watermelon is made of water that helps hydrate the body and avoid the unpleasant side effects of dehydration such as headaches, fatigue, and poor concentration. The rest of the fruit it’s stuffed with nutrients, fibres, carbohydrates and sugars.

Lycopene is a carotenoid phytonutrient mainly essential in the cardiovascular health, acting as a colour pigment, also found in tomatoes, red grapefruits or guavas that give them a reddish colour. According to NWPB (National Watermelon Promotion Board), watermelon contains the highest percentage of lycopene than any other fruit or vegetable subduing its closest competitors, tomatoes, and yellow-fleshed watermelon. Known to have anti-inflammatory benefits by acting as an inhibitor it also has an effective carotenoid antioxidant capability to counteract free radicals known to trigger cancer especially decreasing the risk of ovarian cancer amid postmenopausal woman and prostate cancer as well. It has been recently discovered that individuals with high levels of Lycopene in their blood have 50% fewer chances of having a stroke than others and it is linked to bone health by reducing oxidative stress in bone cells generating stronger bones and joints.

As a carotenoid, is has been shown to offer certain levels of protection against (UV) rays that can lead to photoaging, wrinkles, and skin cancer. Highest levels of Lycopene are found when the fruit fully ripens just like the beta-carotene and phenolic antioxidants nutrients.

Consumed in excess, Lycopene could probably trigger nausea, diarrhea, indigestion and bloat but only after eating abnormal amounts of watermelon at once.

Choline is another essential nutrient this watery fruit has that’s converted by the kidney into the amino acid arginine, a precursor to nitric oxide, accountable for keeping inflammation under control and reducing the risk of neural tube defects by promoting blood flow.

Watermelon Known as an Ancient Aphrodisiac

Because of its blood circulation benefits, it can achieve viagra effects by decreasing the erectile dysfunction consequences. Heart health is also enhanced by improved blood flow through the elimination of excess fat and cardiac stress.

Arginine can produce a muscle relaxant molecule of gas called nitric oxide when converted by the nitric oxide synthase enzyme that increases the space within our blood vessels (vasodilatation) as a direct effect of muscle relaxation improving blood pressure.

One watermelon serving containing 80 µg of Vitamin A represents half of the Recommended Daily Intake (RDI) that stimulates the growth of collagen and elastin cells making it the perfect anti aging wrinkle solution. Beta-carotene transformed into Vitamin A helps create pigments in the retina of the eye and could prevent night blindness and macular degeneration ( the main cause of age-related blindness).

Watermelons have even higher levels of Vitamin C providing one-fifth of the recommended daily intake for each cup resulting in an appropriate creation of collagen, the main component in tissue formation and maintenance as well as promoting sebum production that keeps skin and hair moisturized. The antioxidant protection properties of Vitamin C preserves the integrity of cells and DNA, strengthen the immunity, heals wounds, lighten dark skin spots and improve oxygen intake during exercise.

Eating All Parts of the Watermelon Ensures Even More Benefits

Eating the watermelon rinds provides increased concentrations of chlorophyll, a green pigment crucial in photosynthesis that has amazing versatility and vitality on the human body. It can control hunger and promote weight loss, has deodorizing properties eliminating stink from inside out, provides detoxification power, it is efficient against candida Albicans, stimulates digestion by maintaining intestinal flora, has a calming effect on the nerves decreasing the symptoms of insomnia and relieves systematic redness and swelling. Make sure to pick an organically grown watermelon to avoid ingestion of pesticides or other harmful compounds before deciding to eat the watermelon rind.

Even the watermelon seeds provide modest amounts of bioavailable iron and zinc not to mention rich stacks of protein and fiber. On some Asian countries, they are roasted and ate as a snack or grounded up and used to make bread.

There are no known side effects of consuming watermelon, mainly because all part are eatable. The only caution that must be taken is in regards to the high fructose content meaning that having high blood pressure, diabetes or overweight problems should lead to a lower watermelon intake.
Watermelon Facts

The watermelon is a fruit and also a vegetable

To retain the most antioxidants in this delicious superfood, store your watermelon at room temperature before slicing or in a cool place (50-60 degrees F) to increase their holding time and after cutting it should be refrigerated for up to 1 week.

How do you pick a good watermelon?

In general, a good watermelon has a uniform shape, a dry stem and feels heavy for its size. Next, you should look for the yellow spot, the place where they rested on the ground – if it’s white or greenish then it’s probably not ripe enough. The thump test is controversial and a hollow bass sound should indicate a mellow watermelon – not advisable for beginners as it’s too subjective and there’s no definitive decision on which result the test is supposed to deliver.